Amalia von Königsmarck (1663–1740) was a member of a German-Swedish noble family. Her paternal grandfather, Field Marshal Hans Christoff von Königsmarck took part in the Thirty Years’ War on the Swedish side and, as a reward for his contribution, was raised to the status of a Swedish count. Her father, Conrad Christoff von Königsmarck, was a.o. operative in the Swedish possessions of Bremen and Verden. Her uncle, Otto Wilhelm, served in the Venetian forces in the war with the Ottoman Empire. Amalia’s three siblings spread their graces across Europe. Her elder brother Carl Johan died in Greece having previously served with the Maltese forces and having been suspected of planning an assassination in England. Her younger brother, Philip Christoph, disappeared in Hanover without trace following an affair with the Duchess Sophie Dorothea of BraunschweigLüneburg. Her sister Aurora rose from being the mistress of August the Strong of Saxony to coadjutrix of the noble women’s diocesan convent in Quedlinburg. Aurora’s son, Maurice de Saxe and her descendant George Sand, came to play a significant part in France’s history and literature respectively. In contrast to all of these Amalia von Königsmarck led a fairly quiet life. She was born in Stade in the north of Germany but she spent most of her life in Sweden. She had close ties to the Swedish court and her wedding to Count Carl Gustaf Lewenhaupt in 1689 was attended by the Dowager Queen Hedvig Eleonora, Charles XI and Ulrika Eleonora the Elder. When Amalia von Königsmarck died at Övedskloster in 1740 she was the last of her line in Sweden.(1)

Amalia von Königsmarck was an artistic dilettante in the best sense of the word. In previous centuries the term dilettante did not have the same negative connotation that it has today but merely meant somebody who devoted themselves to art or science for their own enjoyment.(2) Tuition in the art of drawing was part of the education of children from noble families. Though the intention was not that they should become professional artists.(3) For example, the English publication The Ladies Dictionary (1694) claims that drawing, dance, music and reading are suitable pastimes for steering women’s thoughts and actions away from less suitable subjects.(4) Basically speaking there were two educational alternatives open to artistically gifted women in Sweden during the 17th century. Women from artistic families, for example David Klöcker Ehrenstrahl’s daughter Anna Maria, could if there was a sympathetic male relative, become a pupil in that artist’s studio. Amateurs from the upper layers of society could pay for tuition from a professional artist. There are several examples of both women and men from the royal family and the nobility who studied with David Klöcker Ehrenstrahl or with David von Krafft, the two predominant painters of Caroline Sweden. Among Krafft’s pupils were Queen Ulrika Eleonora the Elder,(5) while Ehrenstrahl taught the Königsmarck sisters.(6) The fine arts seem to have played a more important part in Amalia’s life and it is mainly her work that has been preserved. Aurora became better known for her contributions in the field of literature.(7) 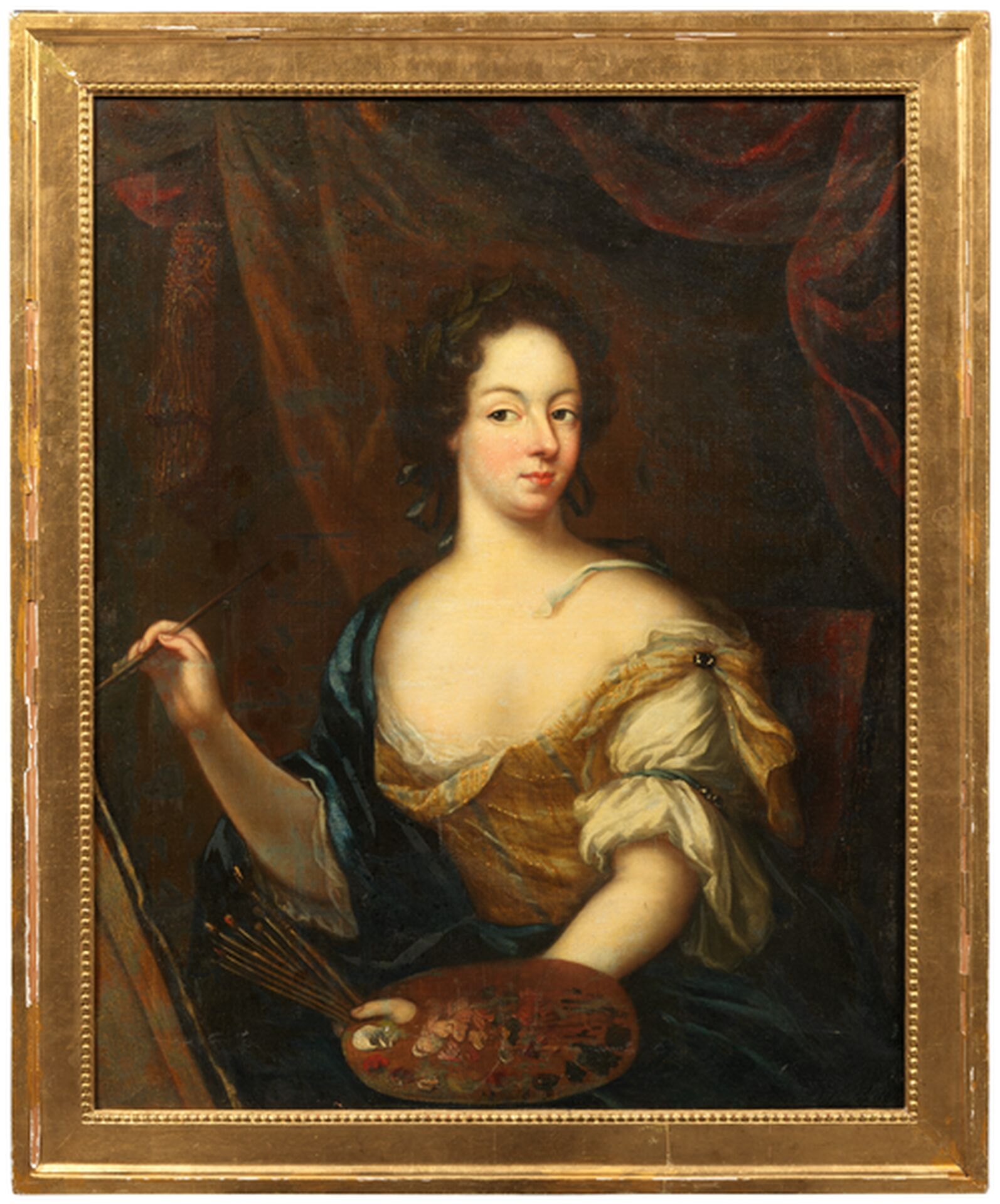 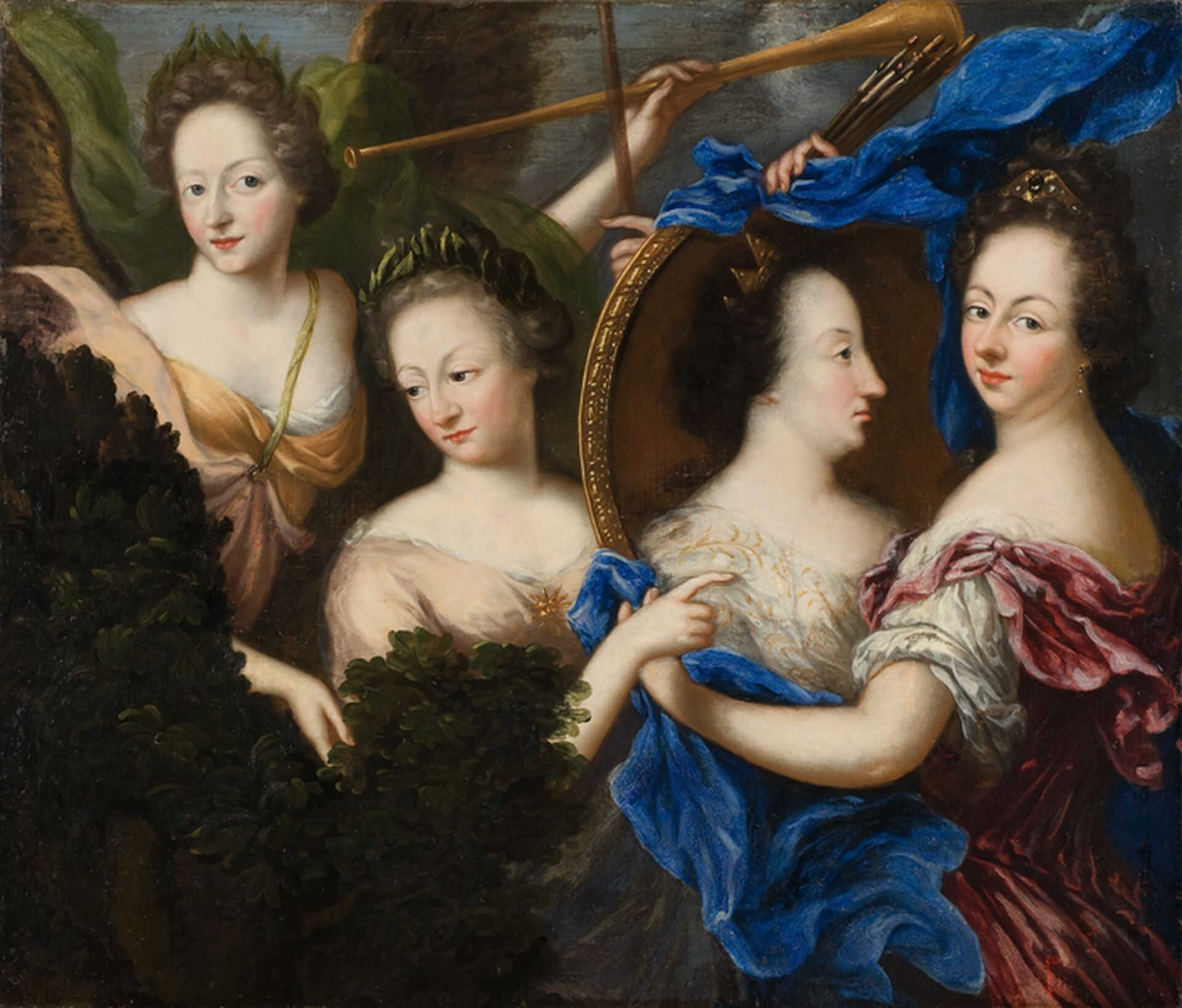 Amalia von Königsmarck painted mainly portraits in oils and, possibly, miniatures also.(8) Among her models there are members of the family including her son Charles Emil Lewenhaupt,(9) as well as people from court circles like court mistress Catharina Ebba Horn af Åminne.(10) Of particular interest is the fact that Amalia von Königsmarck painted several self-portraits.(11) In some particular cases there is discussion as to whether the painting is a self-portrait or not, or whether it should be attributed to another artist,(12) but at least three are signed and therefore indisputable. The numbers are remarkable when one considers the general lack of female self-portraits from the Caroline period. There are no known self-portraits of Anna Maria Ehrenstrahl in existence. Anna Maria Thelott, the daughter of an artist, portrayed herself as an elegantly dressed lady, working at her embroidery in a watercolour in a sketchbook from about 1704–09.(13) A miniature self-portrait by Queen Ulrika Eleonora the Elder gives the impression of being a variant copy after one by Pierre Signac rather than an independent work of art.(14)

In terms of composition and execution it is evident that Amalia von Königsmarck was influenced by her teacher Ehrenstrahl. It is probable that the she also learnt how to construct an allegory from him. A suite of six tapestries on allegorical subjects are thought to have been embroidered in the 1690s based on models by Ehrenstrahl and intended for Amalia von Königsmarck and Carl Gustaf Lewenhaupt. There has been discussion as to whether both of the Königsmarck sisters might have been involved in the composition or were responsible for parts of the embroidery.(15) In an allegorical self-portrait dated 1689 Amalia Königsmarck has portrayed herself holding a portrait of Queen Ulrika Eleonora the Elder. The artist emphasizes her role by holding a bunch of paintbrushes in her right hand at the same time that she indicates her social standing through her costume and jewellery. A female figure wearing a laurel wreath points to the royal portrait. The scene is surveyed by Fama the goddess of rumour and reputation.(16)

A self-portrait, signed 1687, now in the collections of the Nationalmuseum, shows Amalia von Königsmarck seated at her easel holding brushes and palette. She looks straight at the beholder while she puts her brush to the canvas. Her costume is loosely draped; white with a golden outer garment striped with silver and a blue cloak. Hanging in the background is a red curtain with a large, golden tassel – just as in many of Ehrenstrahl’s paintings. The laurel wreath on her head reveals that this is not just a portrait of the artist in action, but is also a symbolic image of art. In his self-portrait from 1691 Ehrenstrahl portrays himself surrounded by two female personifications: Pictura, or painting itself, and Inventio, the creative idea.(17) Pictura is wearing a blue cloak together with a loosely draped white garment with stripes of yellow, red, blue and green. In Ehrenstrahl’s Allegory of the Regency of the Dowager Queen Hedvig Eleonora (1692) too, Pictura is wearing a blue cloak and a dress similar to the one in his self-portrait.(18) In this painting, Pictura also represents Inventio since, according to Ehrenstrahl’s description, she “zeichnet und inventiret” [draws and invents].(19) In Iconologia, Cesare Ripa’s emblem book, he notes that Pictura shall be portrayed wearing many-coloured clothing which agrees with the paintings by Ehrenstrahl and by Amalia von Königsmarck. Though Ripa does not specify a blue cloak, so this might suggest influence from Ehrenstrahl to his pupil. The fact that Königsmarck is wearing a dress of much more expensive fabric than the female figure in Ehrenstrahl’s allegories is an indication of the artist’s elevated social standing.

In Ehrenstrahl’s self-portrait, Pictura is seen handing palette and brushes to the artist, but Königsmarck is shown holding her painting paraphernalia herself. Unlike a male artist she is able to assume the role of Pictura and, in this fashion, to become a personification of painting. Other female artists have also made use of this formula. The most famous example is surely Artemisia Gentileschi’s Self-portrait as Allegory of Painting (1638–39).(20) In Caroline painting, however, Königsmarck would seem to be the only artist to have treated this subject. A painting by Martin Mijtens was previously believed to be a portrait of Anna Maria Ehrenstrahl as a personification of the art of painting, but is now regarded only as an allegory.(21) With Amalia von Königsmarck’s self-portrait as Pictura the Nationalmuseum has acquired the earliest known example in the history of Swedish art of a woman portraying herself in the dual role of working artist and painting personified.