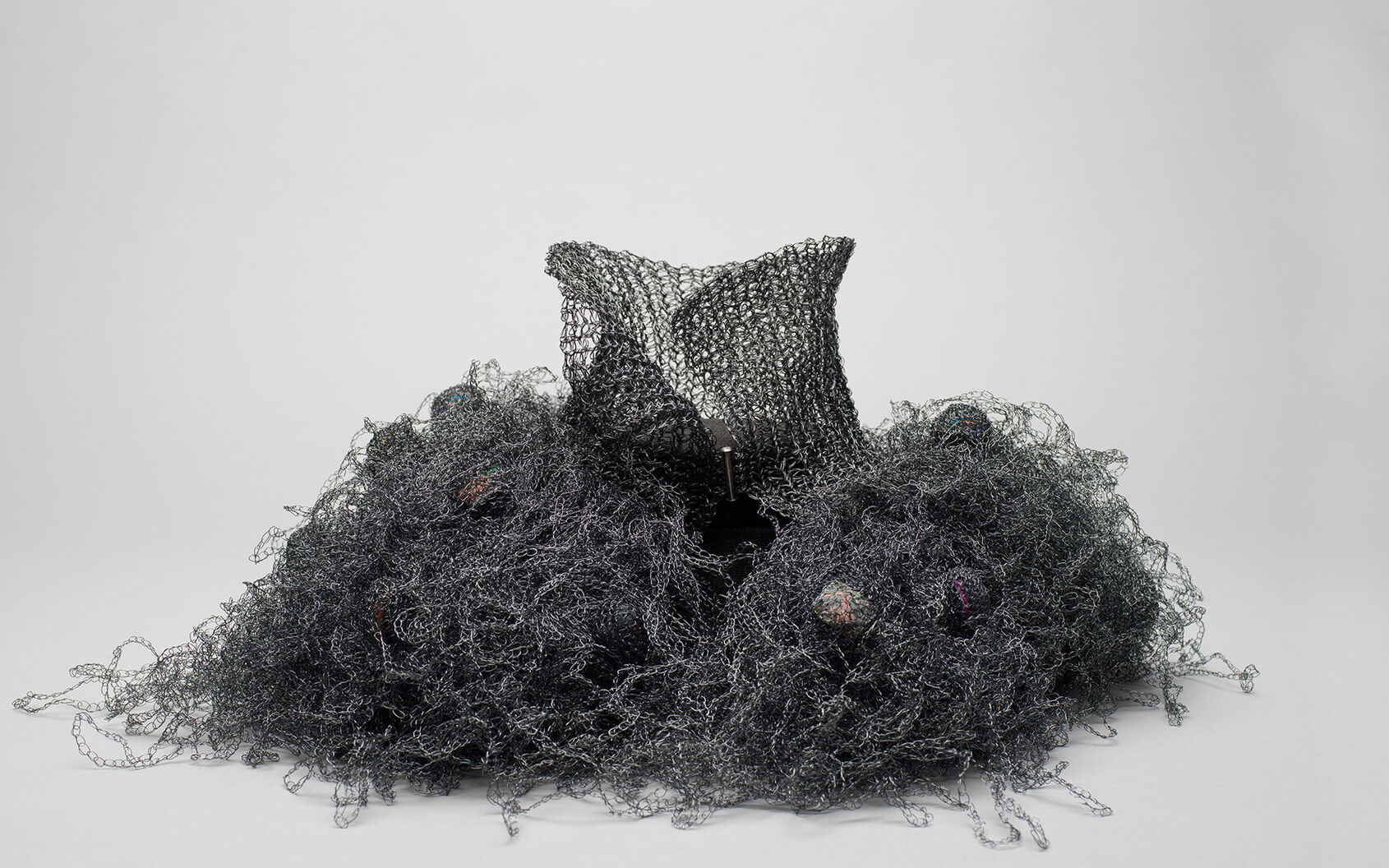 Nationalmuseum has been gifted Inger Blix Kvammen’s necklace Eternity Cap Kanin 2 by the Bengt Julin Fund, administered by the Friends of Nationalmuseum. The jewellery piece is a large crocheted, knitted and embroidered collar in oxidised silver, with portraits concealed amongst the threads. The necklace will be on display in the Treasury when the museum reopens.

The memento mori, a symbolic reminder of the inevitability of death, is a motif with a long historical tradition in art. Colourful bouquets of flowers that will soon wither, half-drunk glasses of wine and extinguished candles; artists have chosen many images to give the viewer pause to humbly ponder life’s most fundamental truth – that we as individuals have but a short time here on earth.

While Norwegian artist Inger Blix Kvammen’s (b. 1954) jewellery also contains elements of memento mori, her message does not refer to individuals but to cultures. Marginalised peoples still living in the manner traditional to their cultures risk extinction at the hands of climate change and the devastation of natural environments. If the specific traditions of indigenous peoples are not valued, their unique ways of life will soon be a distant memory kept alive by a handful of people.

Blix Kvammen’s jewellery speaks of the indissoluble interplay of life, art, culture and nature in the daily lives of nomadic cultures and indigenous peoples. The works deal with identity; universal questions about who we are, why we are here, where we come from and where we are going permeate her oeuvre. The materials are mainly oxidised silver thread combined with her own digital photographs. Blix Kvammen uses the metal thread in textile techniques such as crochet, knitting, weaving, embroidery and sewing. In the thread, she fixes photographs or found materials such as horn, leather and plastic. Her works tell of places and recount memories of the people she meets and their conversations.

Eternity Cap Kanin 2 is included in Blix Kvammen’s series Tundra Archives, part of the artistic project Memory Archives. It was inspired by her encounters with the Nenets of northwestern Russia between 2008 and 2014. The Nenets live a nomadic existence sustained by reindeer husbandry, hunting and fishing in the forest-tundra region of the Kanin Peninsula, between the White Sea and the gulf of the Barents Sea. Although they live in isolation in this landscape, a helicopter delivers various supplies a couple of times a year. All materials are put to use; they make buttons and tools from plastic barrels, nothing goes to waste. Blix Kvammen has described her period with the Nenets as the coldest experience of her life, although the cold was more than compensated for by the warmth of the people. This cold makes itself felt in the necklace Eternity Cap Kanin 2. In shape, the jewellery is reminiscent of a knitted turtleneck dressed with thick fur around the shoulders. Amid the tangle of crocheted threads are spherical cavities in which rest small laminated portraits of the Nenetsi women and girls encountered by Blix Kvammen.

“Eternity Cap Kanin 2 is a welcome addition to Nationalmuseum’s collection of contemporary jewellery. It raises questions about encounters between peoples and cultures and was first exhibited in 2019 at 40 Jagi, the Sami Art Association’s 40th anniversary exhibition at the Alta Museum in Norway,” says Cilla Robach, Head of Collection Unit at Nationalmuseum.

Inger Blix Kvammen lives and works in the town of Kirkenes on the Barents Sea, 15 kilometres from the Russian border and 50 kilometres from Finland, at the north-eastern tip of Norway. She is a member of the Sami Artists’ Union and one of the founders the collective Pikene på Broen, which has been conducting cross-border cultural activities from its exhibition space, workshop and dialogue room in Kirkenes since 1996.

Nationalmuseum receives no state funds with which to acquire design, applied art and artwork; instead the collections are enriched through donations and gifts from private foundations and trusts. The acquisition has been made possible by a generous gift from the Bengt Julin Fund, administered by the Friends of Nationalmuseum.