Nationalmuseum in Sweden has recently acquired a self-portrait of the artist Maria Wiik and a portrait of Sigrid Lindberg by Hildegard Thorell. Both Wiik and Thorell studied in Paris at the end of the 19th century and specialised in portraiture. The acquisitions complement the works of women artists that are already in the museum’s collections.

Maria Wiik (1853-1928) was a Finnish artist, best known for her fine strong portraits and interior images. Wiik studied at the Académie Julian, a private art school in Paris that allowed women students to enrol. While in Paris, Wiik spent time with the Swedish artists Anna Nordlander, Anna Nordgren and Amanda Sidwall. Her breakthrough came at the Finnish Art Society’s autumn exhibition in 1880.

Wiik began painting self-portraits very early on and continued with this her entire life, just like her close dear Helene Schjerfbeck with whom she shared a studio in Helsinki and also in Paris. In Wiik’s early self-portraits, the artist’s gaze is straightforward and self-aware, while the last ones reflect intelligence and insight. Her portraits were highly acclaimed and received positive criticism right from the very beginning.

The self-portrait of Wiik that Nationalmuseum has acquired was painted around 1886 when she was already a famous artist and popular painter of both intimate and psychological as well as large and representative portraits. It was painted with a minimalist, dark-tinted background. Everything decorative has been omitted. The focus is on the artist’s dark eyes in contrast to the white neckline and the dark robe.

In turn, Hildegard Thorell (1850-1930) was one of the most skilled Swedish portrait artists of her time. At first she studied at Konstakademien, the Royal Academy of Fine Arts in Stockholm and then with various teachers in Copenhagen, Dresden and Paris, where she spent time with Julia Beck and Harriet Backer at least twice. Thorell was admitted to the Paris Salon on several occasions. After her studies, Thorell was active in Stockholm and painted several significant persons. In comparison to Wiik, Thorell painted larger figure pictures and portraits. 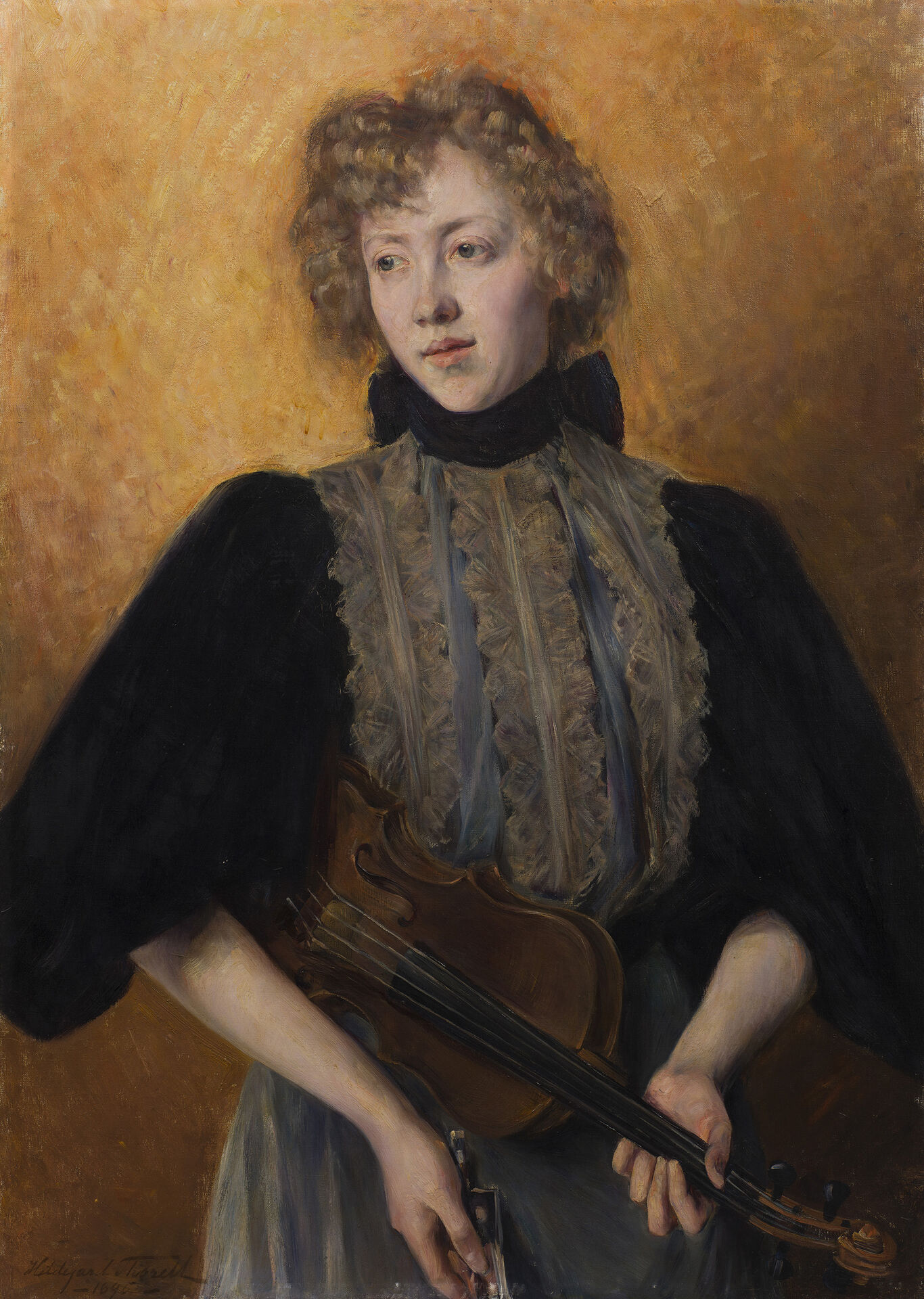 Nationalmuseum’s acquisition of the work by Thorell is a portrait of violinist Sigrid Lindberg, Maria Wiik’s niece and a soloist much in demand throughout Europe. Lindberg performed in several major cities throughout Europe, including in Russia, Finland and Denmark. Thorell’s portrait of her, with her instrument in her hand, was painted in 1890, most probably in Stockholm just before Lindberg left to study at the Conservatoire de Paris. The atmosphere is focused and full of anticipation.

Thorell’s works are included in several museum collections in Sweden. Among the works included in Nationalmuseum’s collections are Modersglädje [Maternal Joy] (1894), which the museum purchased the same year the painting was finished, and Sorgklädd dam [Lady in Mourning] (1896), a testamentary gift from the artist herself.

“I am extremely pleased that we have been able to acquire these important portraits by Maria Wiik and Hildegard Thorell. They show exceptional skill and talent, and help fill gaps in the museum’s collections – plus they give our art history a more diverse perspective,” comments Director General of Nationalmuseum, Susanna Pettersson.

Nationalmuseum receives no state funds with which to acquire design, applied art and artwork; instead the collections are enriched through donations and gifts from private foundations and trusts. The acquisitions have been made possible by donations from Nationalmusei Vänner/Friends of the NationalMuseum.