Amanda Sidwall (1844–1892) was one of the first groups of students admitted to the Academy of Art’s Women’s Section, which opened in 1864 and made it possible for women to pursue a complete artistic training. She had already studied drawing and modelling at the Handicraft Association’s school.(1) To round off her studies Sidwall travelled with her fellow artists Sophie Södergren and Anna Nordgren to Paris in the autumn of 1874. As for many of the artists from the Scandinavian countries during the 1870s and 1880s, Sidwall’s stays in Paris became protracted (1874–77, 1879–83) and gave her a footing in French artistic circles. Attention focussed on the annual Salons, where it was important to have a work accepted and, ideally, hung prominently and given an award. She was encouraged by her teacher at the Académie Julian, Tony Robert-Fleury, and at times acted as a kind of auxiliary teacher. Sidwall exhibited works at the Salons in 1880 and 1882, one of them a genre painting entitled The First Lesson (La première lecon) of a little girl attempting unsuccessfully to repeat a lesson learnt by heart to some critical older children and which was given a prominent position. Despite her plans to continue her career in France, Sidwall was to remain in Sweden after her visit in the summer of 1883. She died in 1892 during a flu epidemic.

Amanda Sidwall’s oeuvre consists mainly of portraits and genre studies, often domestic scenes with endearing children in prominent roles. In a letter from Paris she refers to the expense of employing professional models. This is one of the reasons why she often painted portraits of her friends, which is what Nationalmuseum’s recently acquired painting of a woman dressed in black gives the impression of being, even though the subject has not been identified (Fig. 1). The plumed hat with its high crown and folded brim, like the hairstyle with its fringe and the ringlets trailing down the neck, suggests that it can be dated to the years around 1880. The face is depicted almost completely in profile although both eyes are visible. The features are finely traced in almost imperceptible brushstrokes while the brushwork in the rest of the image is coarser. Sidwall was interested in the effect of a freer style and has herself described her method of painting as “the way I daub freely”, which was praised by French contemporaries interms such as “touche habile et grasse” or “libre allure”.(2) The brushstrokes in the neutral grey-green background are clearly visible. It was probably painted with the specially prepared brushes, half of whose bristles were long and half short, that Sidwall often used to apply the finishing touches to sections of the canvas. In this case she has achieved a shimmering, atmospheric effect that creates a feeling of space around the subject without specifying the setting. Éduard Manet renders the background in Nationalmuseum’s A Parisian Lady from 1876 in a similar manner and there are other parallels between the works – both portray a modern woman dressed to set out for the city, rather than a specific individual. 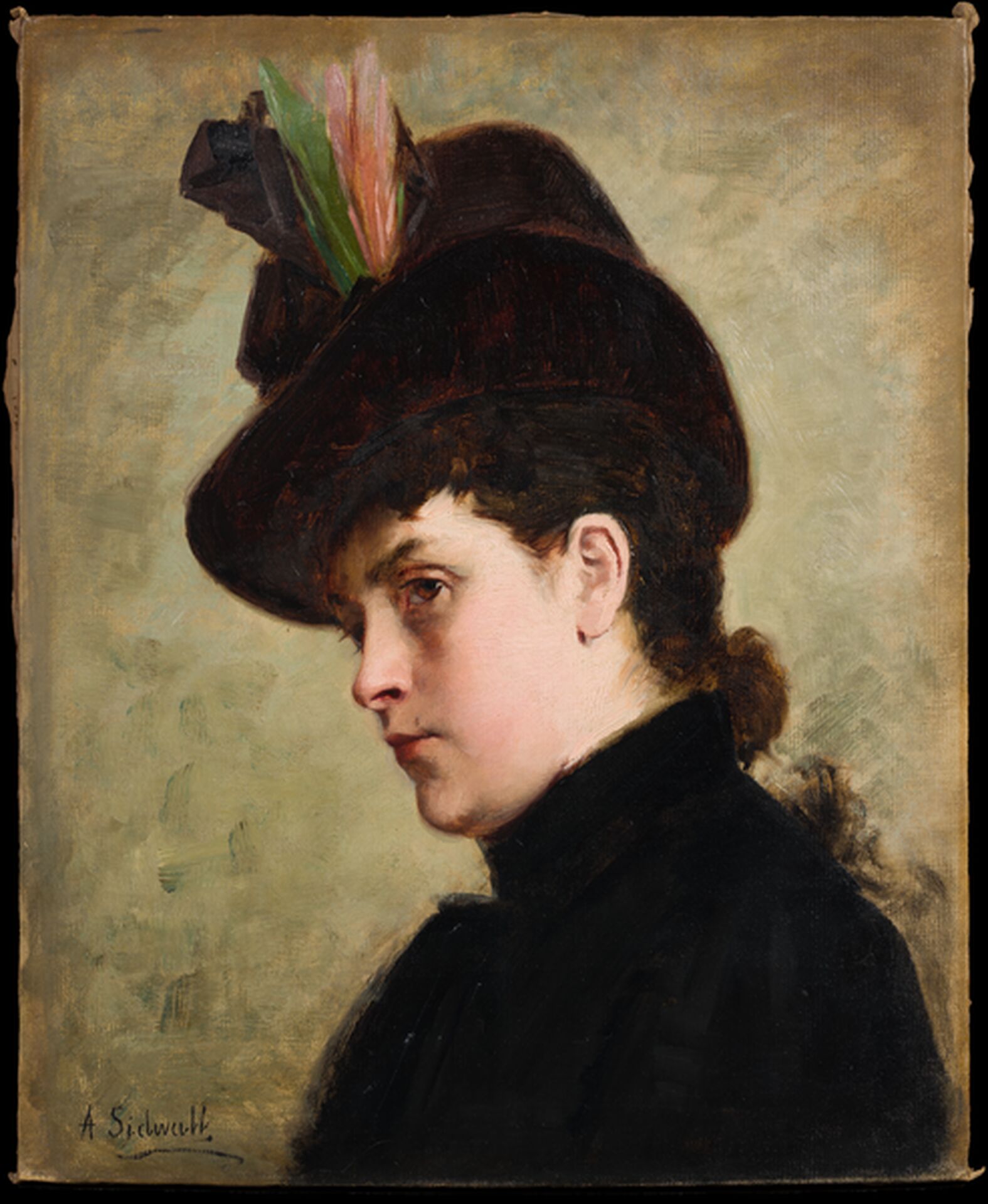 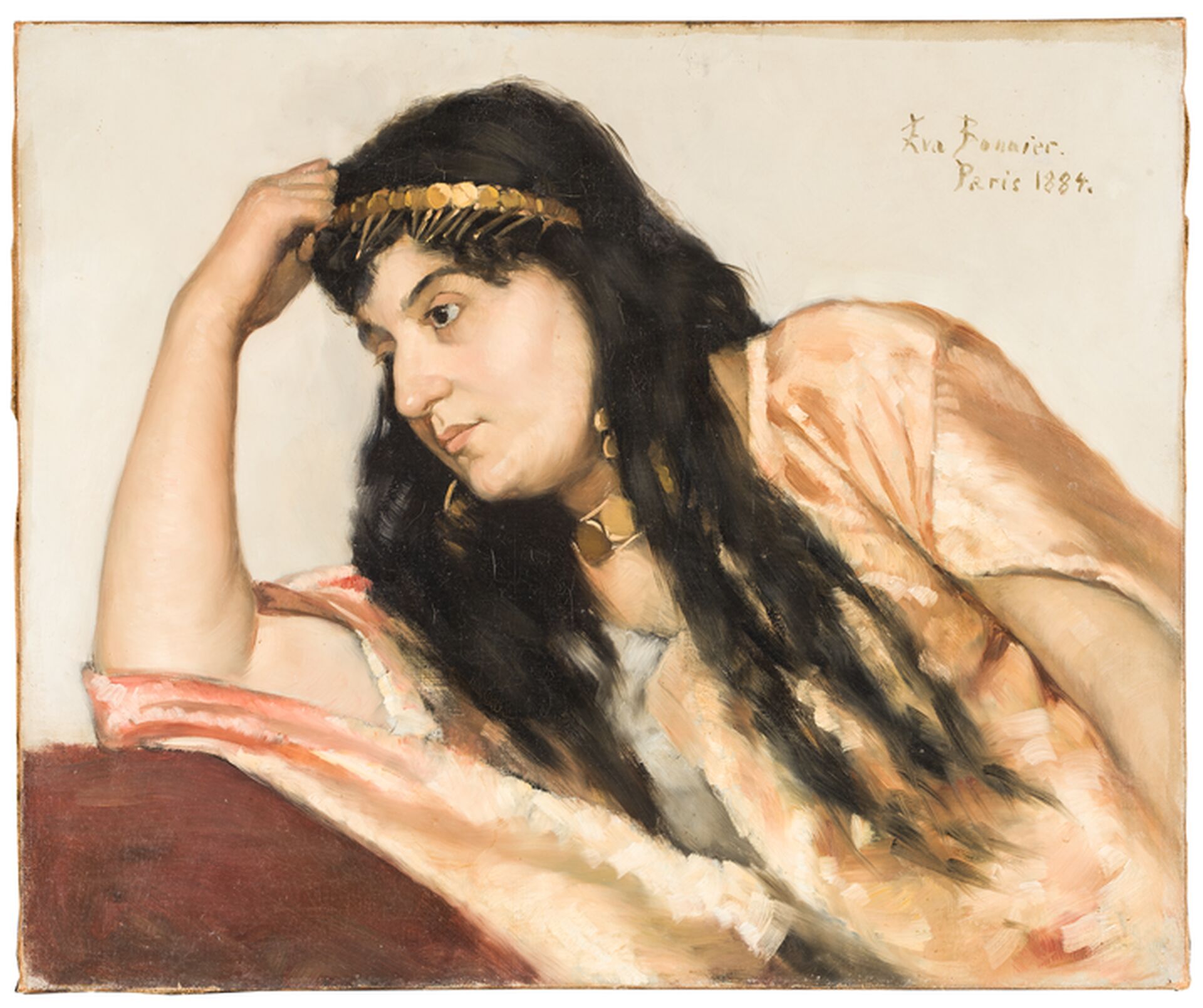 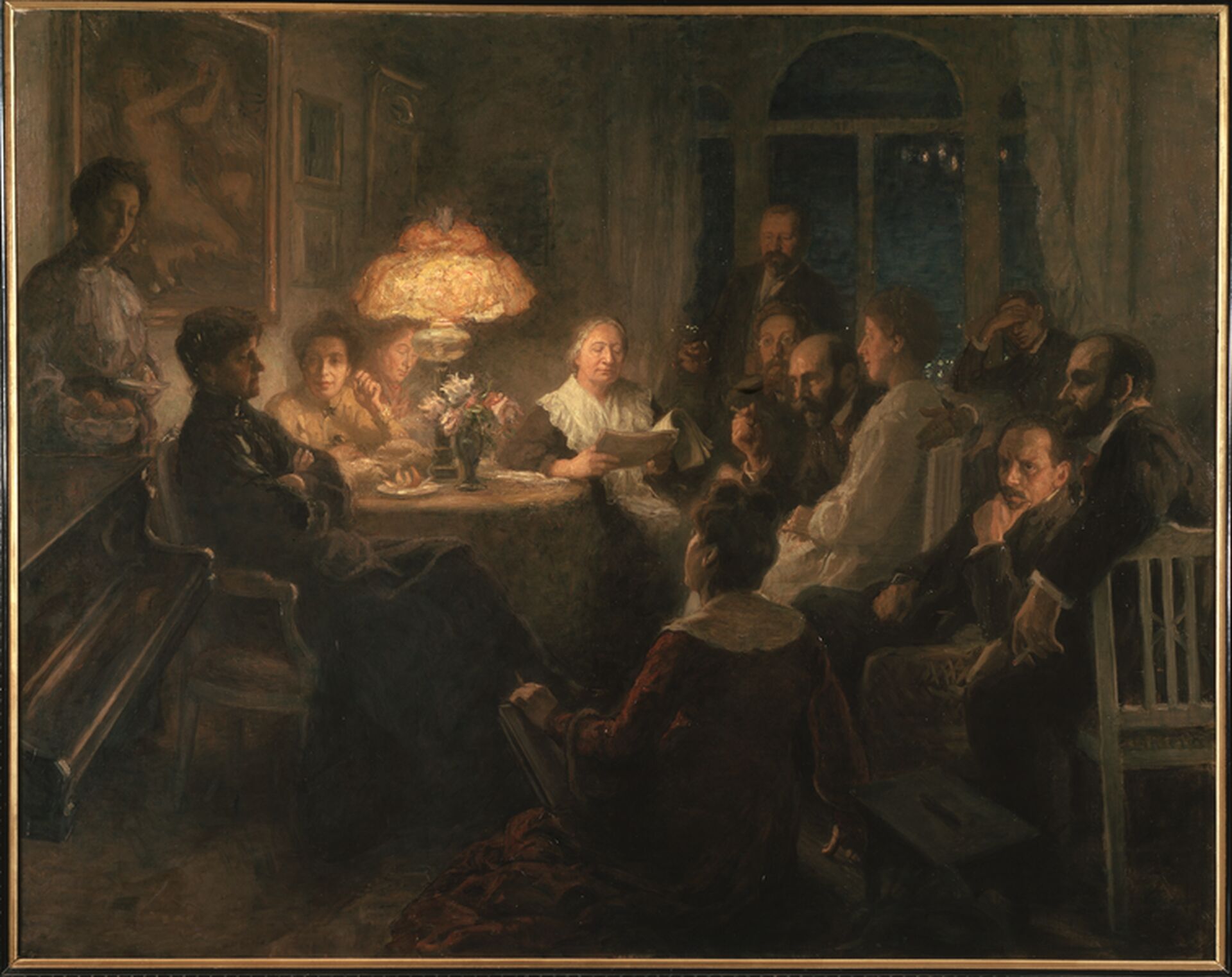 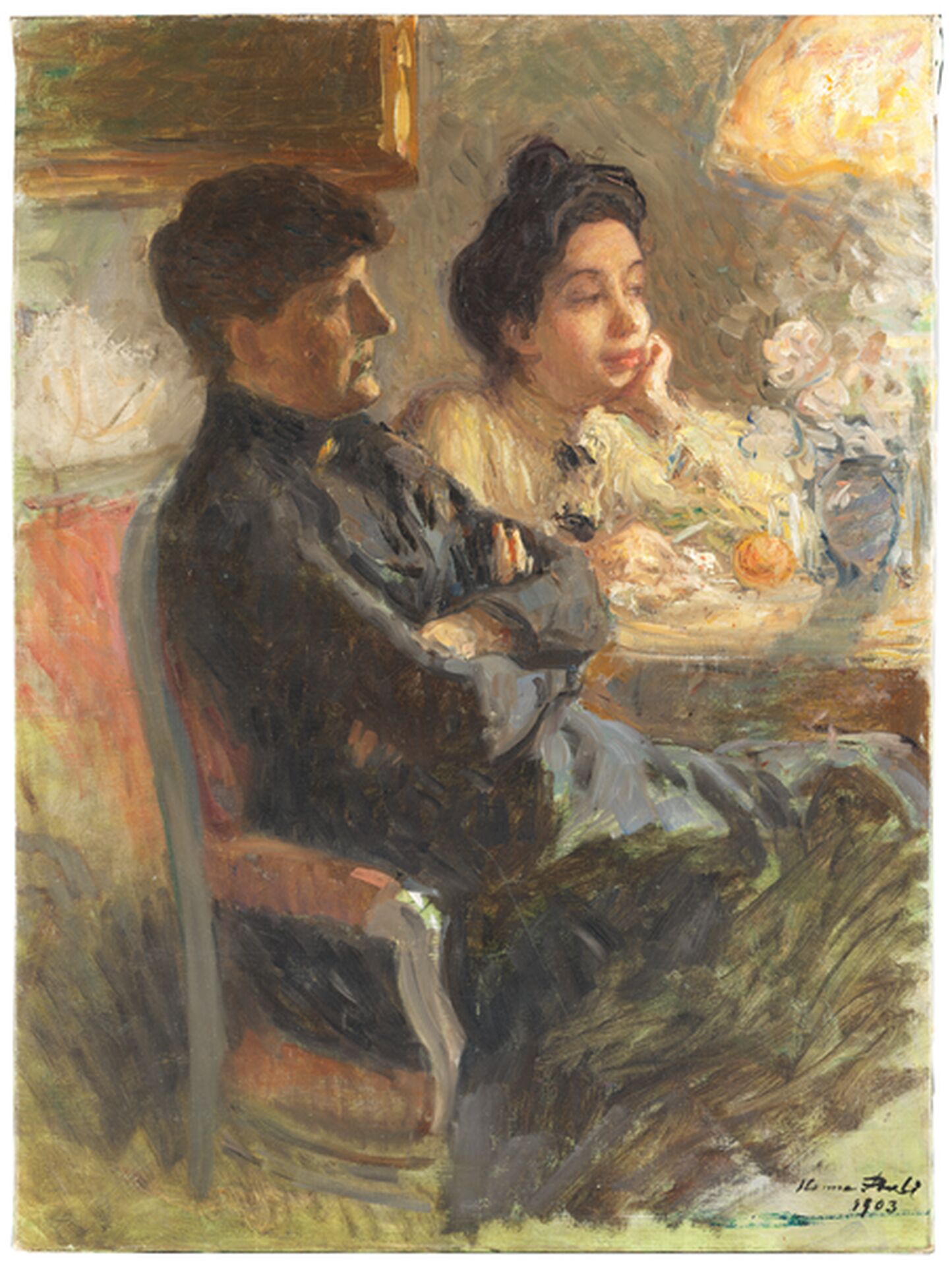 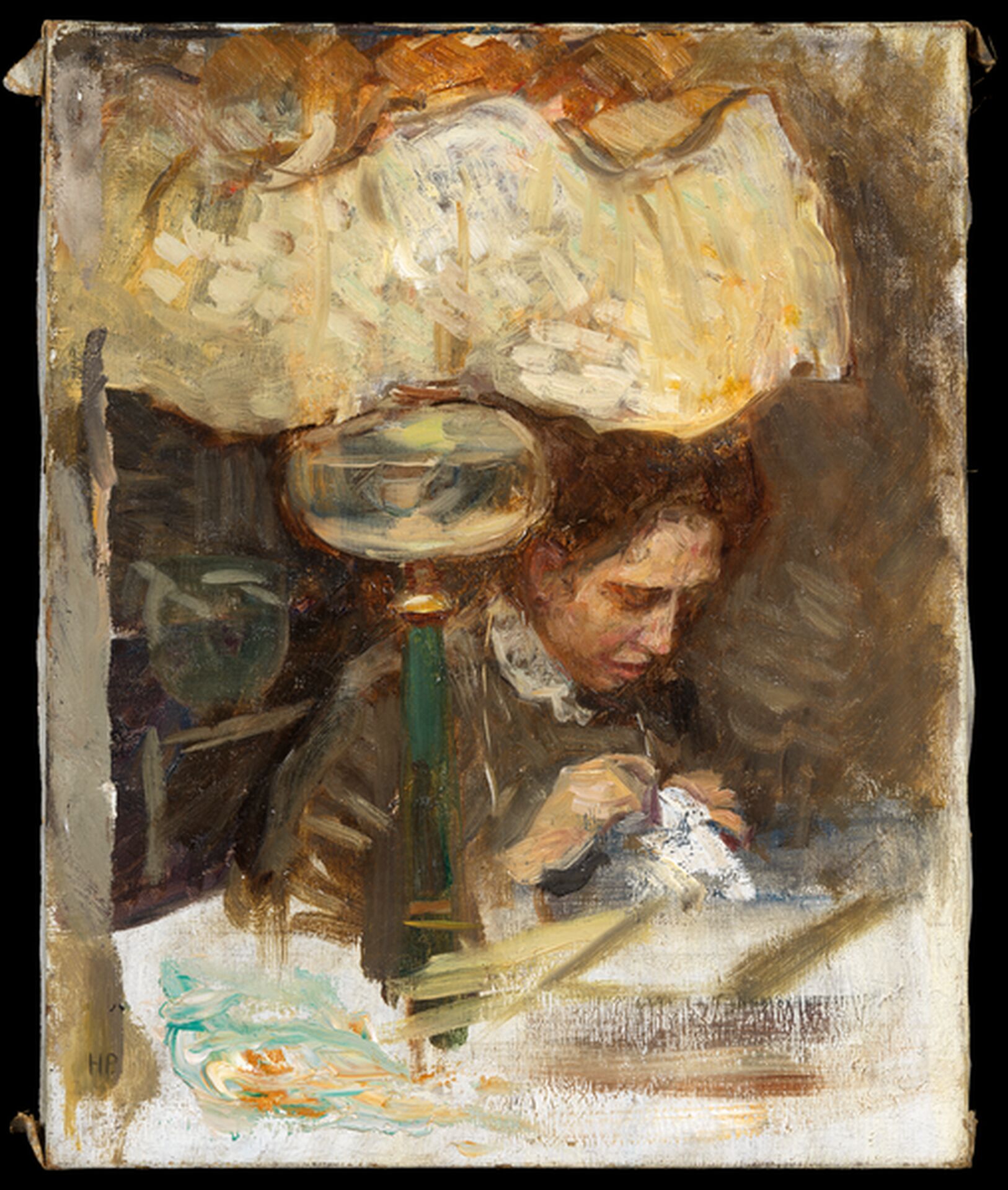 In the autumn of the year in which Amanda Sidwall left Paris never to return, Eva Bonnier (1857–1909) arrived in the city. For Bonnier too, the years she spent in Paris between 1883 and 1889 were to involve independence, artistic development and some degree of freedom from the bourgeois conventions that governed her life in Stockholm. As the daughter of the publisher Albert Bonnier she was financially independent and belonged to one of Sweden’s leading liberal Jewish families. In Paris she largely enjoyed the company of the group of friends she had acquired at the Royal Academy of Art in Stockholm, where she had begun her studies in 1878. Unlike Amanda Sidwall, Eva Bonnier did not have to worry about finding the money to pay models. Even so the motifs in most of her works are interiors and portraits of her family and friends. The painting with the semirecumbent Turkish woman or ‘odalisque’ recently acquired by Nationalmuseum (Fig. 2) reminds us that she also worked with professional models in more or less exotic garments.(3)

Depictions of this kind formed part of the teaching at the Académie Colarossi, which Eva Bonnier attended during her early years in Paris, but she also employed models for her own private use, both professionals and members of her wide circle of friends. This study of the “Turkish woman” was probably not part of the preparation for a composition with an oriental theme, the kind of motif found in Parisian paintings but which did not interest the artists Bonnier was acquainted with, who focused on realistic depictions of contemporary life. The painting is signed and dated “Paris 1884”. In a letter to her family Eva Bonnier describes showing the canvas to her friend Anna Cramér: “It is a ‘femme turque’ a life-size half-length ‘odalisque’ and is probably the most passable study I have made. Today [Carl] Larsson askedme, like the rest of our friends, to send something home for the artists’ centre lottery at the end of February. I thought I would send this study and Anna C. thought it was good enough. In that case I will pack it tomorrow and send it petite vitesse /…/ Of course as a study it has not been finished off, but they will be getting lots of this kind of thing. If a title is needed, the best would be ‘Odalisque’”.(4)

One of Eva Bonnier’s closest friends in both Paris and Stockholm was Hanna Hirsch (1864–1940), married to Georg Pauli from 1887. The large group portrait entitled Friends (Fig. 3), completed in 1907 depicts Hanna Pauli at a meeting of the Junta, a society founded by Eva Bonnier’s brother Karl-Otto and his wife Lisen where their circle of friends could gather to meet, listen to readings and discuss. Eva, who rarely attended the meetings, is not a member of the group of eminent cultural and financial figures depicted at the Pauli’s home on Bellmansgatan in Stockholm as they gather in the lamplight to listen to the author and debater Ellen Key, sitting at the illuminated table in the centre of the picture. Hanna Pauli made a number of studies for Friends, of which two have been acquired by Nationalmuseum. One of them, dated 1903, depicts Lisen Bonnier and the actress Olga Björkegren Fåhræus (Fig. 4). The actress is portrayed in the same pose as in the finished work, but Pauli has altered Lisen Bonnier’s portrayal from a semi-profile with her head supported by one hand to an en-face depiction.(5) The other study has no date and depicts the artist Nanna Sohlman Bendixson, bending over her needlework in the rays of the lamp (Fig. 5). In the final version Pauli has moved her to a less prominent position to the left of the lamp, perhaps to place more focus on the figure of Ellen Key. To compensate to some extent for the vacuum this leaves, the vase of flowers glimpsed on the right in the study of Olga Björkegren Fåhræus and Lisen Bonnier has been shifted to a position to the right of the lamp. These changes mean that the figure and character of Nanna Bendixsson have been given less prominence. The studies reveal Pauli’s early ideas for Friends and offer further illustration of the long creative process behind one of the key works in the cultural history early twentieth-century Sweden.

Notes:
1. For more information about Amanda Sidwall, see Marita Lindgren-Fridell, “Amanda Sidwall, ett konstnärsöde”, in Konstvärlden, Sommarboken, 1943, pp. 80–87, reprinted in a slightly abbreviated version in the exhibition catalogue De drogo till Paris. Nordiska konstnärinnor på 1880-talet, Liljevalchs, Stockholm 1988, eds. Lollo Fogelström, Louise Robbert, pp. 101–105;
Minnesutställning över Amanda Sidwall 1844–1892, Nationalmuseum exhibition catalogue no. 85, Stockholm 1942 (foreword by Gertrud Serner); Barbro Werkmäster, “Amanda C V Sidwall”, Svenskt biografiskt lexikon (Amanda C V Sidwall, https://sok.riksarkivet.se/sbl/artikel/5899, accessed1 September 2017.)
2. Lindgren-Fridell 1943, p. 86.
3. Eva Bonnier’s letters from Paris contain frequent remarks on the models she employed for her paintings and sometimes refer to the models at the Académie Colarossi, where in December 1883 she drew a black man in “Arab costume”. Pariserbref. Konstnären Eva Bonniers brev 1883–1889, ed. Margareta Gynning, Stockholm 1999, p. 35 (8 December 1883).
4. Pariserbref 1990, pp. 53–54 (25 January 1884). See also Görel Cavalli-Björkman, Eva Bonnier, ett konstnärsliv, Stockholm 2013, p. 92, who misunderstands, however, some lines in the letter where Eva Bonnier writes: “If this happens [that EB sends the painting to Stockholm] Mamma will not be able to see it, no great loss, and nor has Papa seen either this or any other of my studies”. Her parents will not be able to see the painting as they are not in Stockholm: it is not the case that the painting has to be concealed from her mother because of its motif.
5. A sketch for this section of the finished painting was sold at Svensk-Franska Konstgalleriet in 1940 (photograph in Nationalmuseum’s archives, according to the information on the mount dated to 1900, which must be an error).
6. Nationalmuseum also has a sketched study of Nanna Bendixson from an earlier phase in the
composition (NMH 30/1934).