The expression of the emotions in man and animals, by Charles Darwin 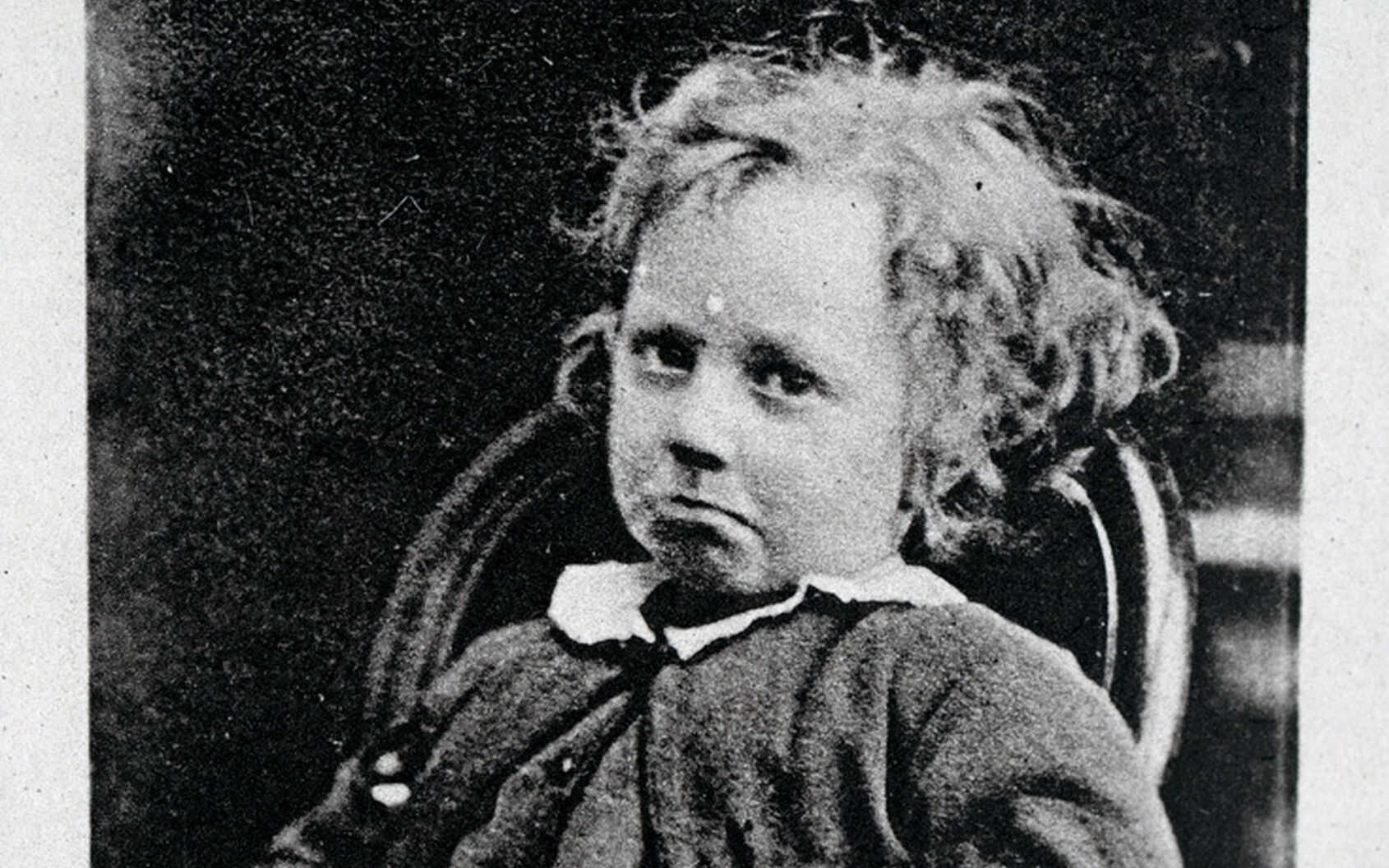 The Art Library collection includes a first edition of The Expression of the Emotions in Man and Animals by Charles Darwin, published in 1872. This book is the third and final part of Darwin’s trilogy on evolution – his “great evolutionary cycle of writing” as he described it. It was also one of the first scientific works to be illustrated with photographs. The book is relatively unknown today, but when it first appeared it was a real bestseller, with several thousand copies being sold as soon as it was published.

The author, Charles Darwin (1809–1882), was a British scientist who is known around the world for his 1859 work On the Origin of Species by Means of Natural Selection. In this work, Darwin set out his theories about the principles governing the evolution of plant and animal species, introducing concepts such as natural selection and survival of the fittest. In 1871 he published his next work, The Descent of Man, setting out his theories on the origins and evolution of humankind. Darwin’s theories were highly controversial in an era when many people still regarded human beings as a divine creation and were therefore very reluctant to accept that humans and animals had common origins. The following year, to further bolster the case for his theories, Darwin published The Expression of the Emotions in Man and Animals.

To win over his critics, Darwin collected as much evidence as possible of the similarities between humans and animals. Originally this material was intended to form a chapter in The Descent of Man, but it was so extensive that Darwin decided to publish it as a separate volume.

Darwin disputed the prevailing view that the muscles of the human face were a divine creation to express uniquely human emotions. He sought to prove that the inner feelings of humans and animals manifested themselves outwardly in similar ways, with similar expressions. For instance, when concentrating hard, humans and animals both pucker their lips, and when angry, the eye muscles contract and the teeth are bared. For Darwin, facial expressions like these were living proof that humans are descended from animals. In the book he analyses in detail how the muscles of the body and face interact to express a range of emotions from unease, sorrow, happiness and love to hate, guilt, pride and fear.

The Expression of the Emotions contains a large number of illustrations – not only drawings and woodblock prints but also photographs. Darwin was convinced that photographs were essential as the best way of illustrating various expressions of emotion. His publisher was sceptical and concerned about the high costs involved. The solution was an all-new photomechanical technique known as heliotype, devised by the photographer Ernest Edwards (1837–1903), which made the mass printing of photographs possible for the first time using specially treated printing plates.

Darwin was effectively looking for snapshots of human emotional expressions – a tall order for the photographers of the day, since the technique was cumbersome and time-consuming. The exposure time could be as long as two minutes – a long time to hold on to a spontaneous expression. The end result therefore often appeared to be a stiff grimace. Darwin eventually used photographs by five different photographers, most notably Oscar Gustave Rejlander. 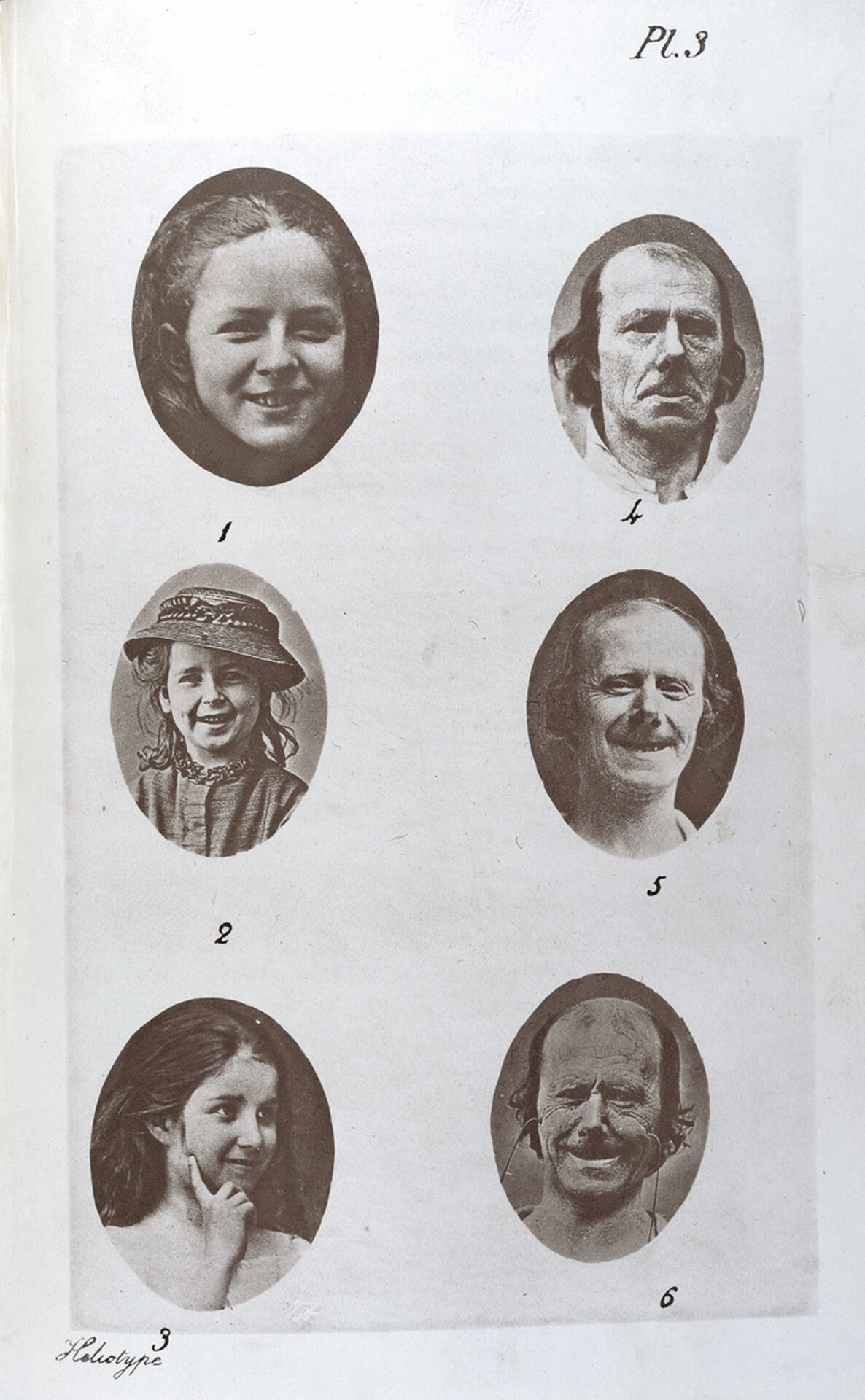 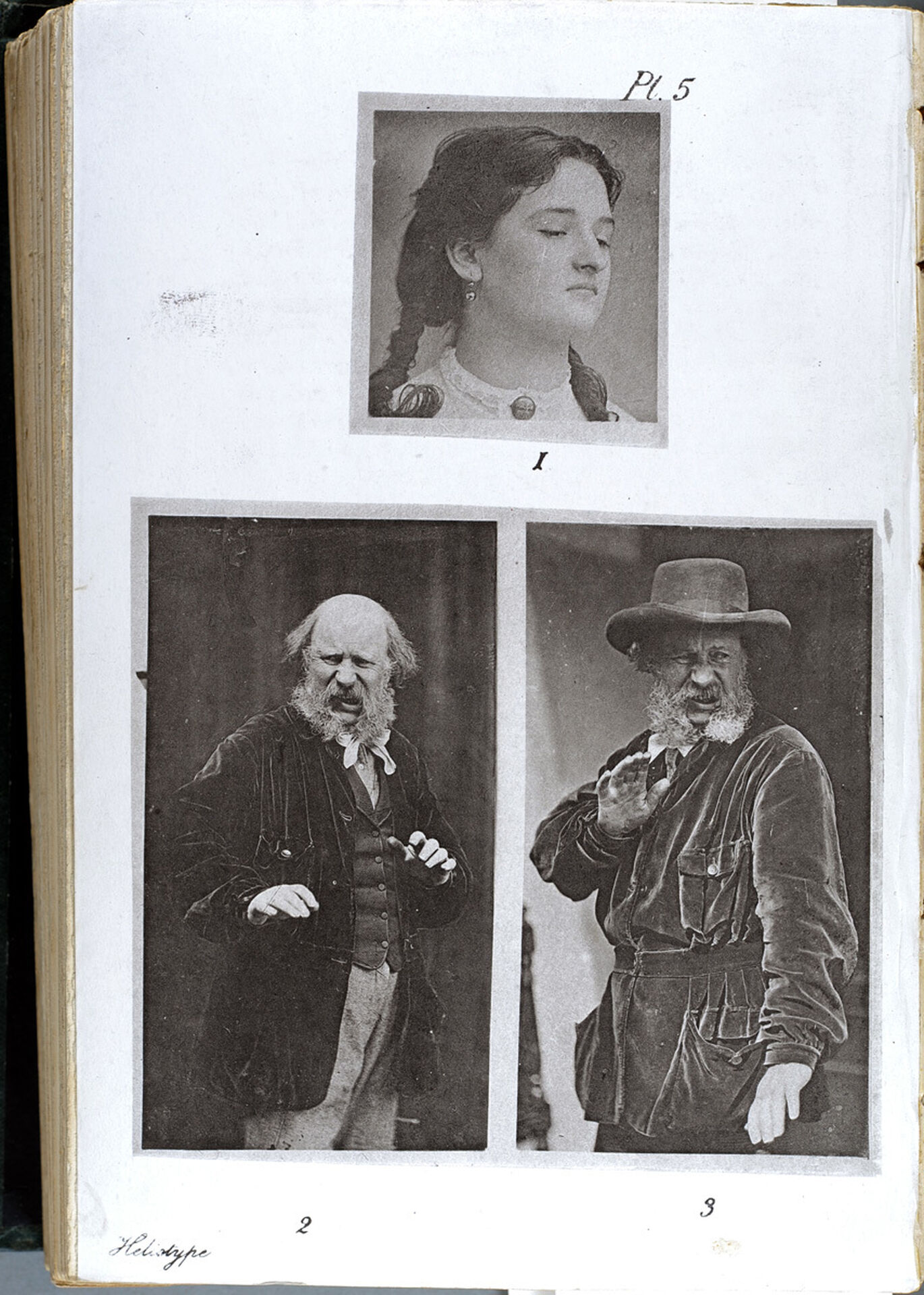 Disgust. The model on the two pictures at the bottom of the page is the photographer, Oscar Gustave Rejlander. 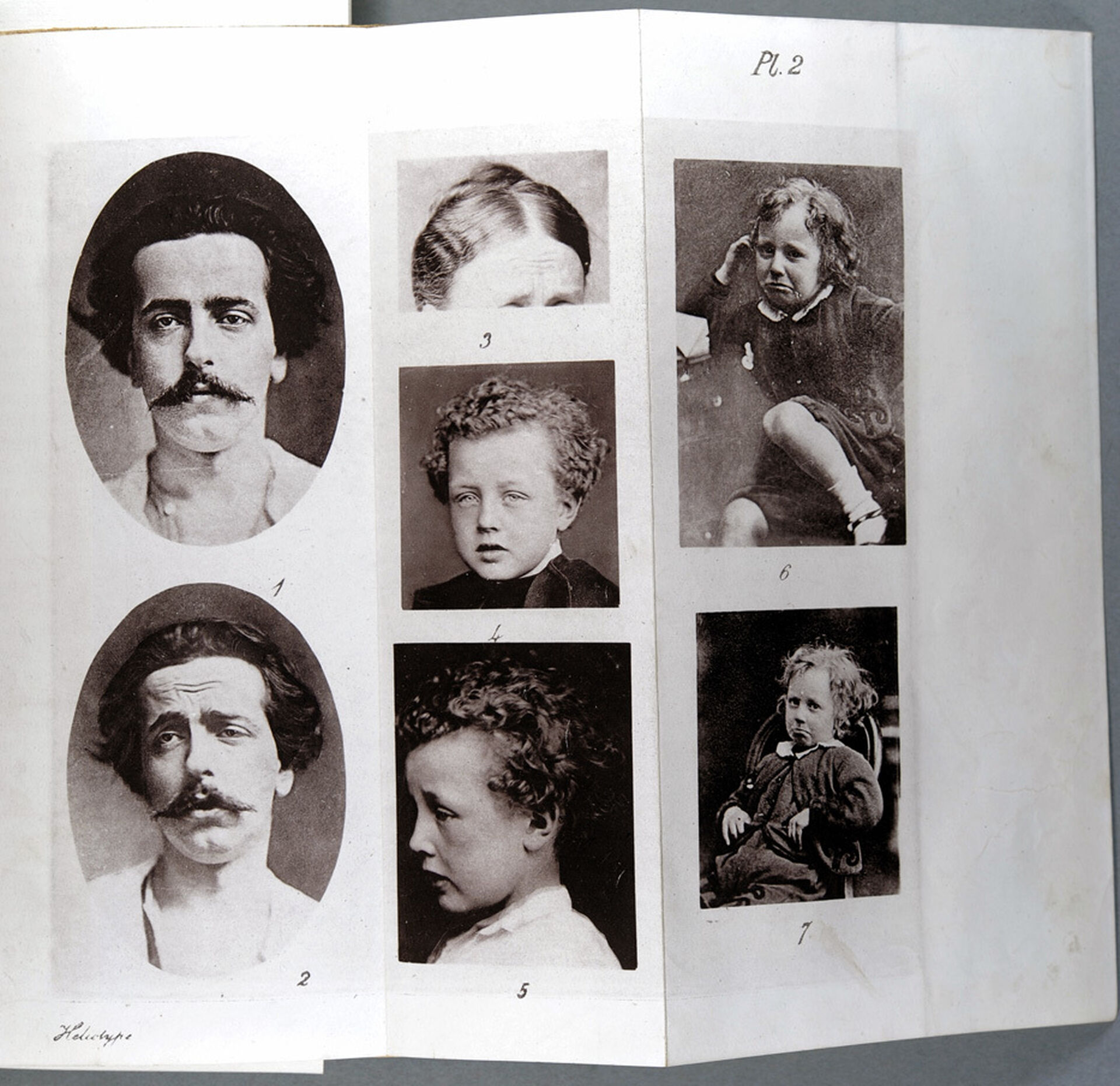 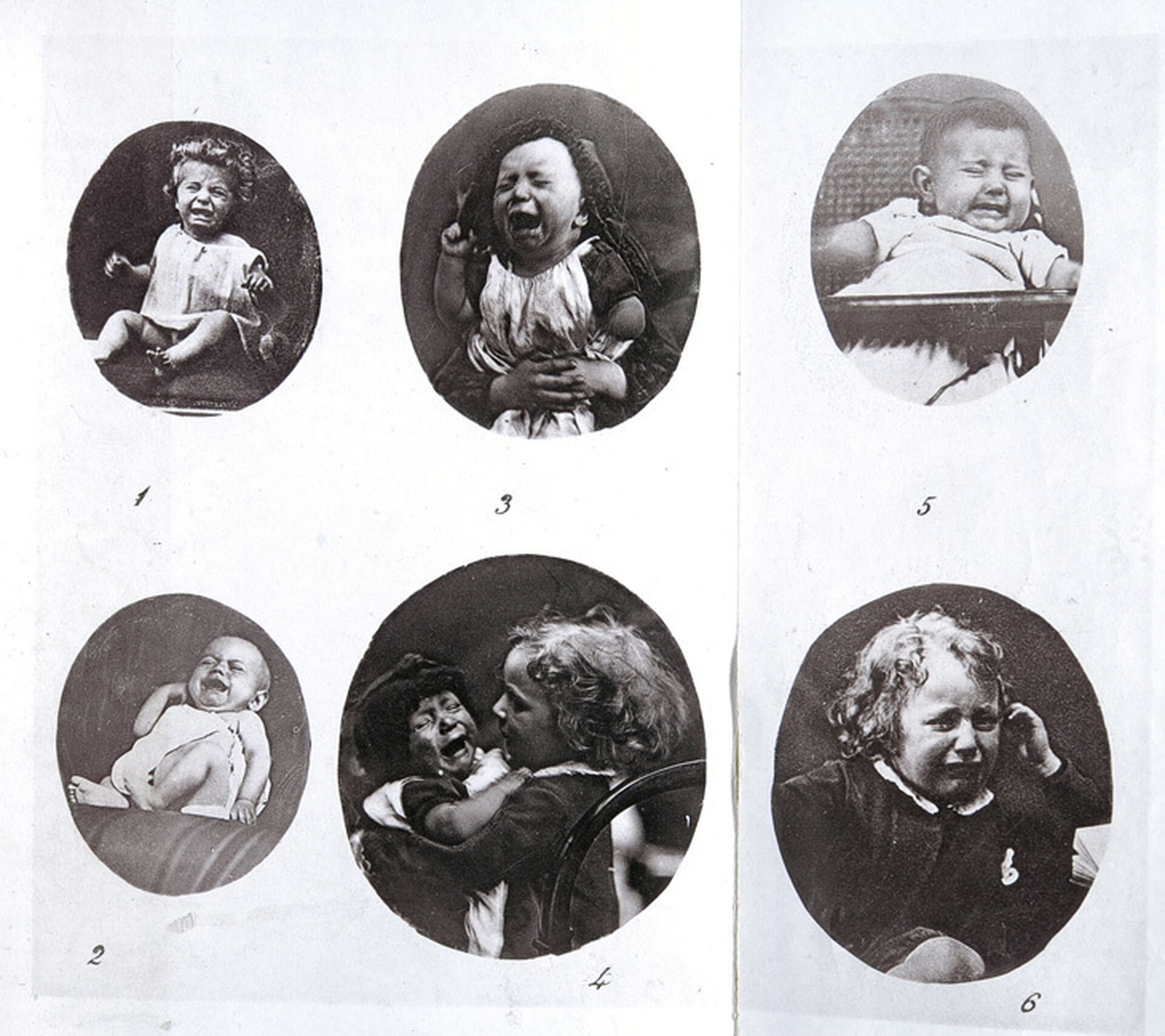 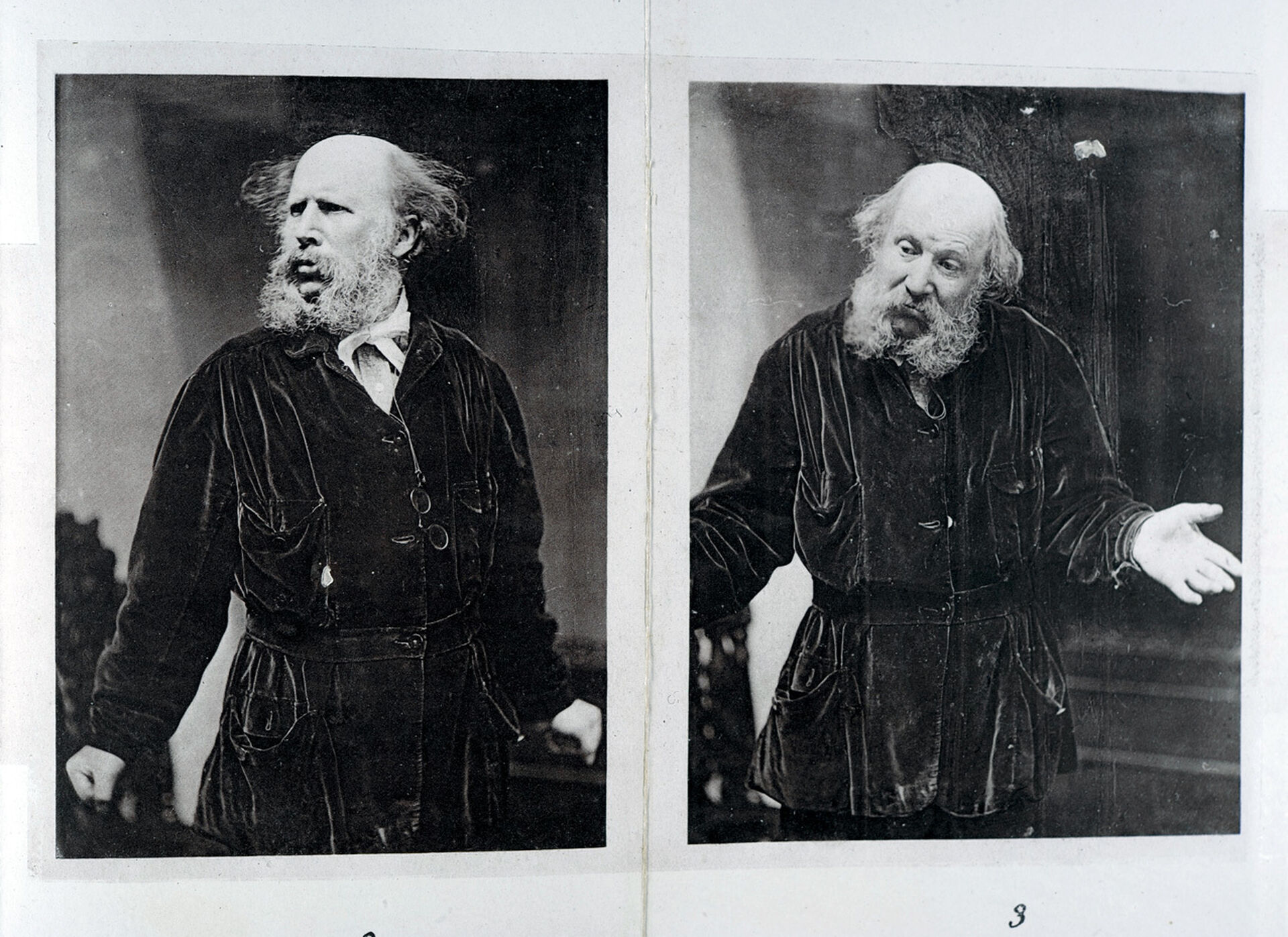 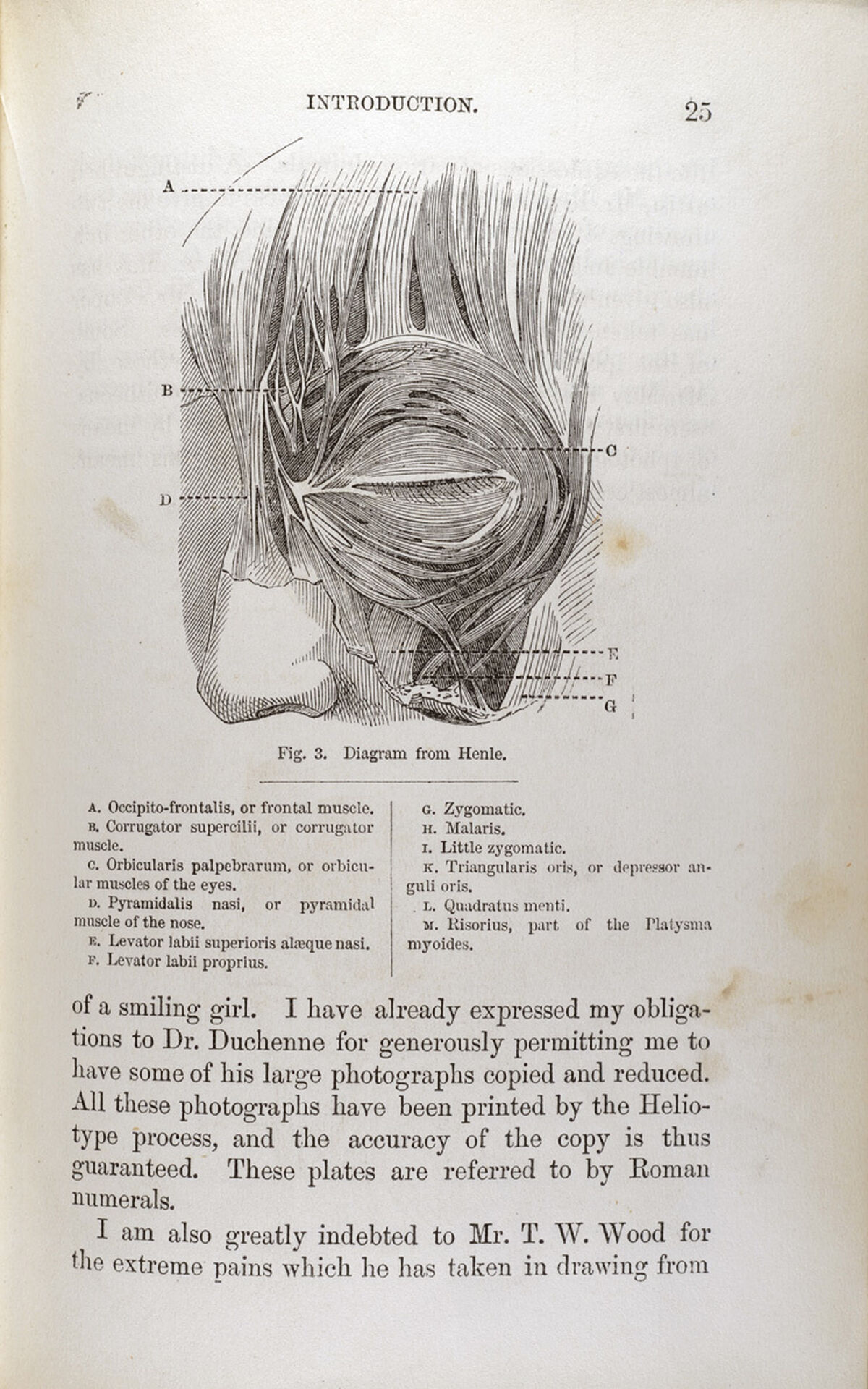 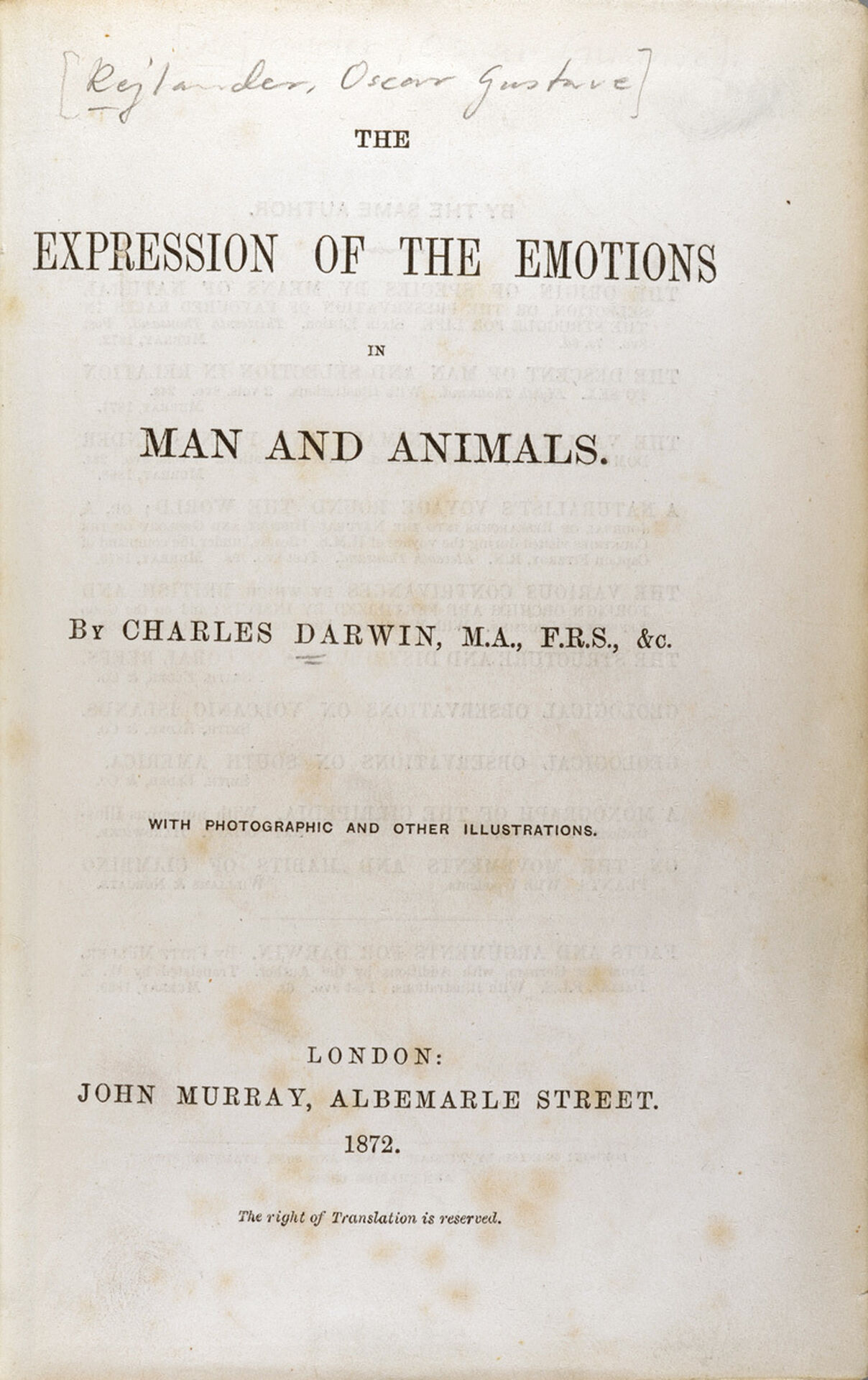 Oscar Gustave Rejlander (1813(?)–1875) contributed 19 of the 30 photographic illustrations in The Expression of the Emotions. He served as his own model for several of the photographs, enthusiastically illustrating emotions such as surprise, helplessness and disgust through a mixture of body language and facial expressions in a variety of somewhat exaggerated poses.

Rejlander is believed to have had Swedish roots, although the details of his ancestry are unclear. He spent most of his working life in Britain. A trained artist, Rejlander was greatly impressed by the new technique of photography, changing careers in the 1850s to become a portrait photographer. In his day Rejlander was one of the leading names in photography, thanks to his successful experiments with techniques for taking and developing photographs and his advanced photomontage work. He frequently gave lectures and published several books on the subject, and his photographic works were sold through booksellers and art dealers. In the late 1860s Rejlander was a true celebrity, mixing with many famous names of the time. In the 1870s he suffered from ill health, probably diabetes, dying at home on 18 January 1875.

Oscar Gustave Rejlander was a great inspiration to later generations of photographers and has been dubbed the father of art photography by many photographic historians. He is represented in the Moderna Museet collection.

The Art Library’s copy of The Expression of the Emotions in Man and Animals is part of the Helmut Gernsheim Duplicate Collection, purchased by the Swedish state in 1964 as the starting point for a Swedish museum of photography. In addition to photographs, the collection included early photography textbooks from the 19th and early 20th centuries. The books were sent to the Photography Library, which was built up in parallel with Moderna Museet’s photographic collection. The Photography Library and the Art Library merged to form a single library on 1 July 2013, and the Art Library collection now contains over 250 titles from the Helmut Gernsheim Duplicate Collection.