The painting of Bartholomew the Apostle by the Italian painter Luca Giordano has been donated to Nationalmuseum, the first painting in the collections by this famous Baroque artist from Naples whose final years were spent as painter at the Spanish court. It was generously donated by the Friends of Nationalmuseum.

During the second half of the seventeenth century, Luca Giordano (1634–1705) was a leading painter of the Neapolitan School. At that time, Naples was one of the biggest cities in Europe and its population was larger than that of Rome. During the seventeenth century, southern Italy was part of the Spanish Empire and the culture of Naples was thus influenced by both Italy and Spain. A young artist from Naples would naturally be interested in both the dynamism of the Baroque art of Rome and the Spanish tradition. 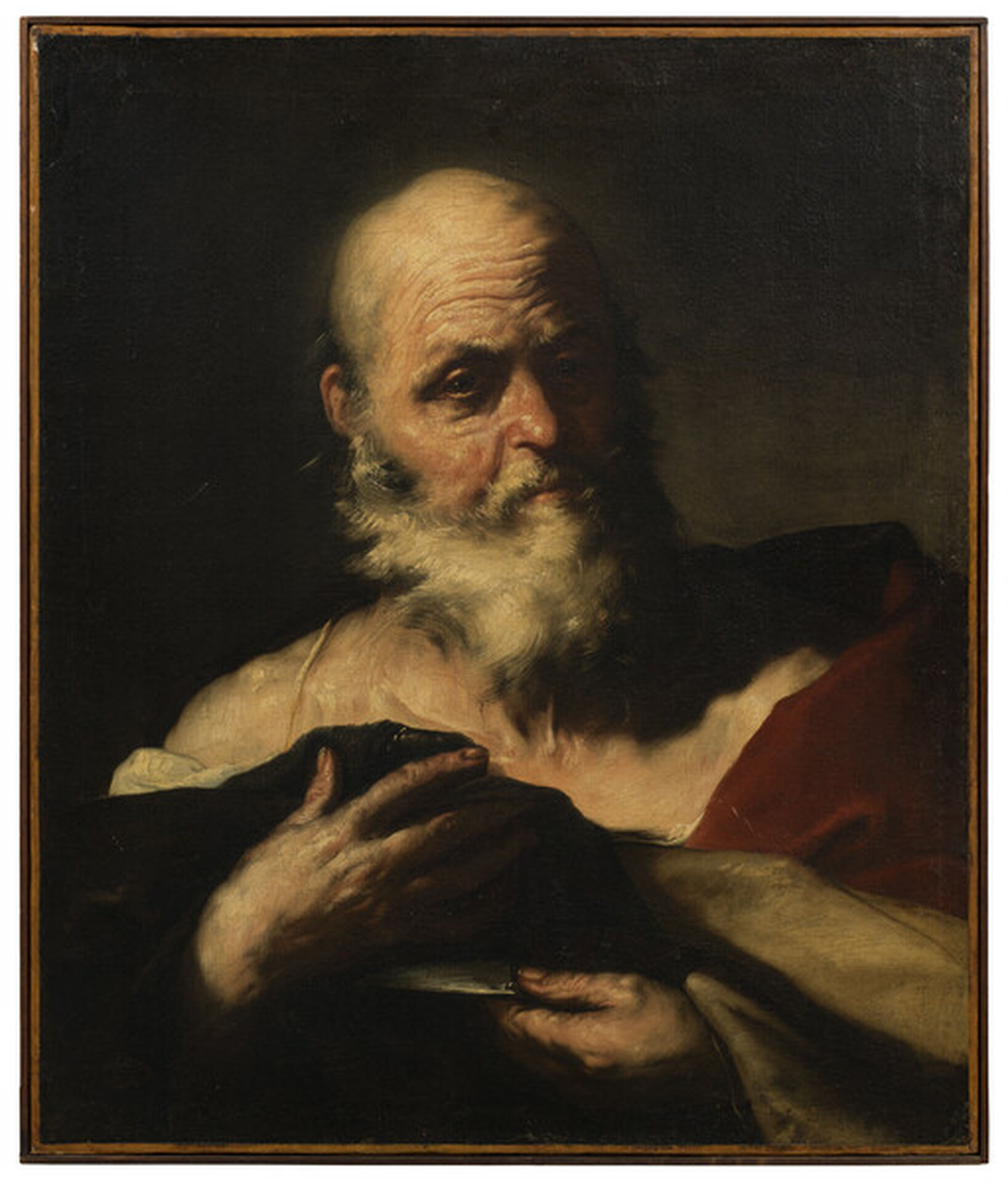 The paintings of saints and philosophers by the Spanish master Jusepe de Ribera, inspired Giordano’s painting of Saint Bartholomew, one of the disciples of Jesus. Ribera was himself influenced by Caravaggio. Several aspects of the painting of Bartholomew are characteristic of this tradition, like the dramatic use of light, with one side of the saint’s face hidden in darkness, and the painting’s emotional realism. The old man’s wrinkles, wisps of hair and his dirty hands are depicted with a painful honesty; the viewer experiences the saint in a very real and intimate way. Bartholomew was flayed alive, and the knife in his hand is a reminder of his martyr’s death. It is also a symbol that identifies the man who is the subject of the painting. Earlier sources, aiming to explain the similarity between the two master painters, allege that Luca Giordano studied in his youth with Ribera who died in 1652; this however has never been verified. The portrait of Saint Bartholomew is dated from around 1660; during this period Giordano painted several similar works in the style of Ribera.

Luca Giordano was a versatile and prolific painter who ran a large workshop. He used many different styles and techniques and was famous for working extremely quickly, which earned him the nickname “fa presto” (“does, or paints, quickly”). Although Giordano received commissions in Florence and other locations in Italy, he did not move from his hometown of Naples until 1692 when he was invited to Madrid by the Spanish king, Charles II. Giordano became a painter of the Spanish court in 1694 and lived in Spain for ten years, returning to Naples some years before his death.

“Nationalmuseum has a very fine collection of Neapolitan art but this is the first painting by Luca Giordano. I am looking forward to seeing Giordano’s painting of Saint Bartholomew displayed on the same wall as works by Jusepe de Ribera and Bernardo Cavallino this autumn. These paintings demonstrate the importance of Caravaggio for painters in Spanish southern Italy during the seventeenth century”, said Martin Olin, head of research at Nationalmuseum.

Nationalmuseum receives no state funds with which to acquire design, applied art and artwork; instead the collections are enriched through donations and gifts from private foundations and trusts. This acquisition is a generous donation from the Friends of Nationalmuseum.

The painting is on display in the museum from 1 November 2022.