The exhibition Nordic Myths, presented at Nationalmuseum Jamtli in Östersund, focuses on visual storytelling in Nordic art during the 19th and early 20th centuries, a period when artists favoured subjects drawn from myths, fairytales and history. The exhibition includes a number of works by artists such as Carl Larsson, Elsa Beskow, Ernst Josephson and August Malmström, all from Nationalmuseum’s collections.

Nordic Myths are about visual storytelling in Nordic art during the 19th and early 20th centuries. It was an era before the advent of modern cinema, when art still had a largely narrative purpose. During this time, motifs taken from myths, fairytales and history were popular and used by many of the leading artists. The exhibition includes a number of works by artists such as Carl Larsson, Elsa Beskow, Ernst Josephson and August Malmström. In total, around 110 works are on display – mainly paintings and sculptures, but also drawings, graphics and applied arts. All the works in the exhibition belong to Nationalmuseum, which owns rich collections of Nordic art, especially 19th century Swedish art.

Nils Blommér, Fairies of the Meadow, 1850. Oil on canvas. 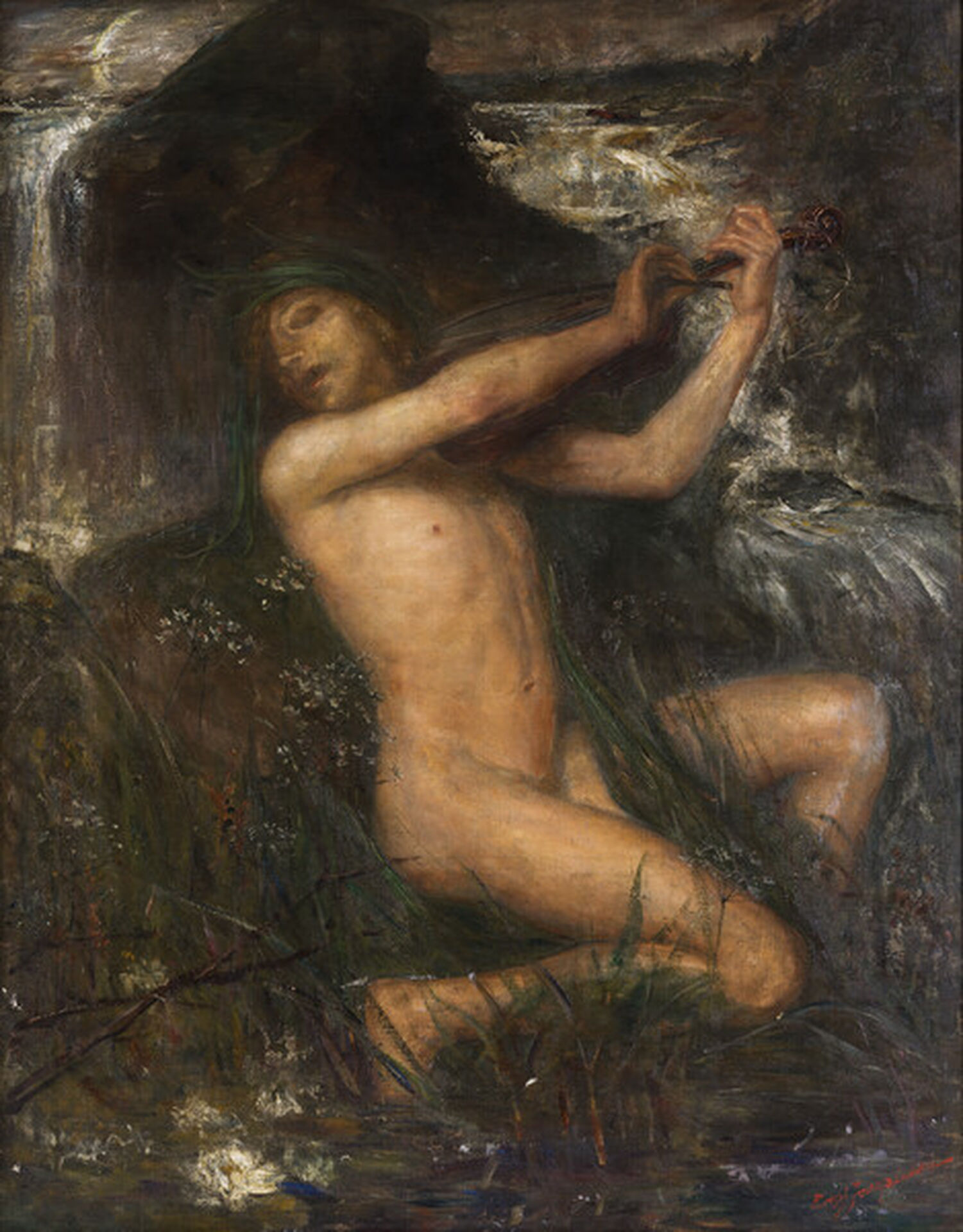 The artists of the 19th century were rooted in classical traditions. The gods of Greek and Roman antiquity and Renaissance frescoes were obvious starting points. One of art’s important tasks was to convey a morally edifying message. With the dawn of modern nationalism in the 19th century, it became increasingly important for artists to depict topics from national history. But in the Nordic countries there was also an interest in using Norse mythology and Old Norse fairytales as motifs. Instead of depicting Jupiter and Venus, painters and sculptors chose their Nordic counterparts, Odin and Freya. Today, some of these works of art bring to mind our contemporary popular culture, such as TV series such as Game of Thrones and the film adaptations of the books of J.R.R. Tolkien, productions that were not infrequently inspired by 19th century art peppered with Old Norse motifs. August Malmström’s illustrations for Tegnér’s Frithiof’s Saga are one example of this.

Some of the 19th century paintings with historical motifs have become true classics, images that have often been reproduced in school textbooks, among other things. Carl Wahlbom’s Death of Gustav II Adolf of Sweden at the Battle of Lützen is one such work. The fighting is chaotic and violent. Horses rear, soldiers fall, and gunpowder smoke and fog obscure swords and banners. The painting has helped to create the image of the king as a hero who dies for his country and for his Protestant faith. It is striking how many of the paintings with historical motifs have a tragic theme. Dying kings, violent battles, fires and disasters are common subjects.

Romanticism, which was the dominant artistic, literary, musical, and intellectual movement during the first half of the 19th century, involved an interest in folk traditions, fairytales and stories. Folkloric notions of supernatural beings such as trolls and fairies became a starting point for many artists. Nils Blommér painted the fairies dancing in summer meadows and evil water spirits among the moonlit waves. Evil water sprites also became a central motif for Ernst Josephson, who three decades later portrayed a violin-playing version of the creature as a sort of representation of the Romantic artist.

The years around the turn of the 20th century were a heyday for illustrated children’s books. One reason for this was the development of printing technology. Artists such as Elsa Beskow, Ivar Arosenius and John Bauer developed the medium of the illustrated children’s book into personal works of art in their own right. Using the decorative language of the Art Nouveau style, Bauer breathed new life into the Romantic motifs of fairytales. Sagas, myths and history were not only interesting for picture book illustrators. The national Romantic and Symbolist movements around the year 1900 also involved a general interest among visual artists in these types of subjects. One example is Richard Bergh, whose painting Vision depicts a historical event – Valdemar Atterdag’s fleet on its way to Visby in 1361 – as a kind of dream or fantasy image.