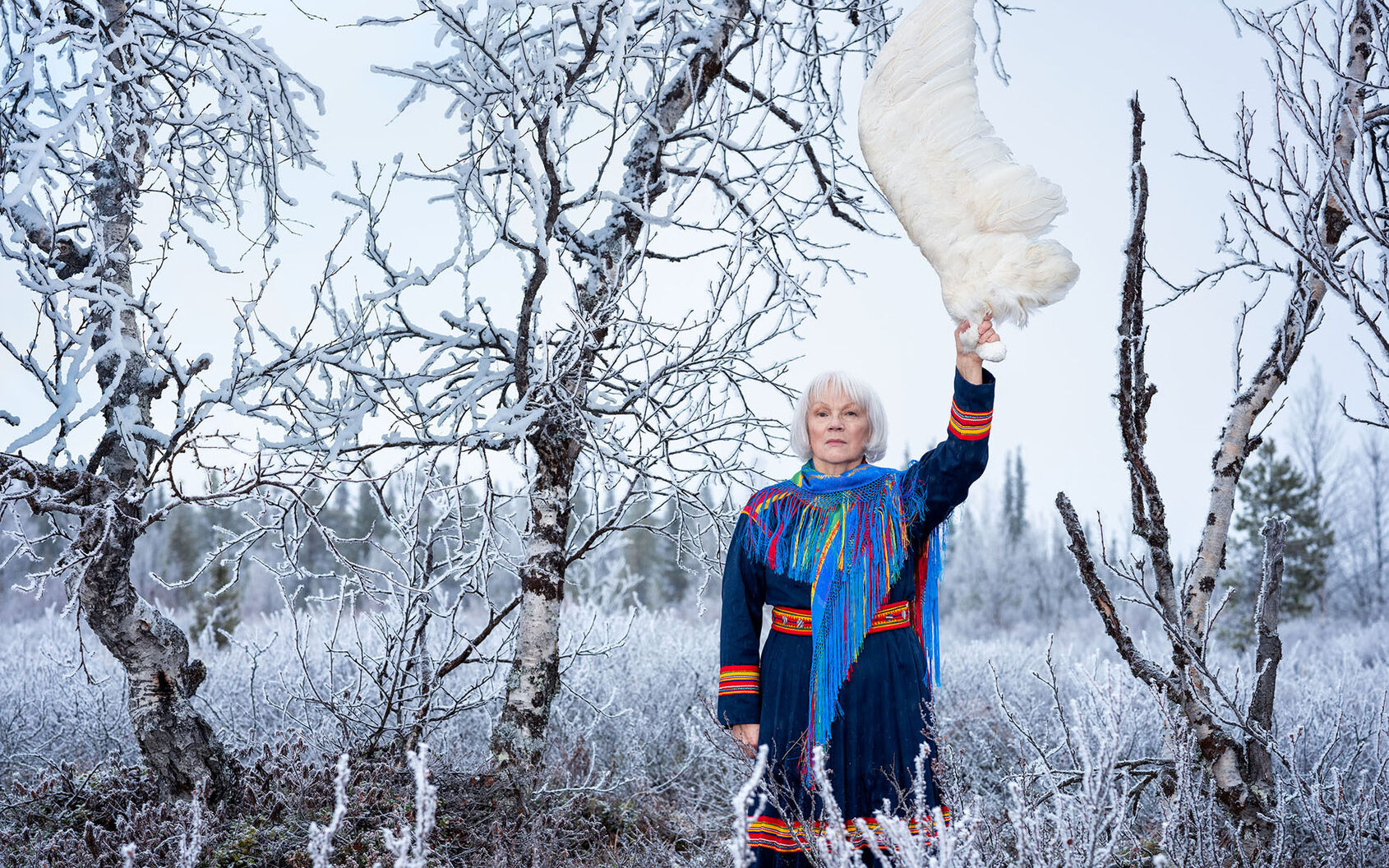 The 2022 Portrait of Honour depicts the artist Britta Marakatt-Labba, known around the world for her embroidered images of Sami landscapes with both a poetic and a political message. The portrait is the work of Marja Helander, whose photographs of Sami landscapes, people and culture have won multiple awards. The portrait joins the collection of the Swedish National Portrait Gallery and will be unveiled at Gripsholm Castle on 12 November.

Born in 1951 at Idivuoma, Karesuando, in the far north of Sweden, Britta Marakatt-Labba grew up alongside nine siblings. As a child, she loved collecting pebbles and playing with them. Little did anyone know then that she would grow up to be a world-renowned artist working in textiles, watercolours, graphics, illustration, costume and even set design. She studied at the School of Design and Crafts (HDK) in Gothenburg (1974–78) and at the Sámi University of Applied Sciences in Kautokeino (1999–2002).

Marakatt-Labba has been the recipient of numerous prestigious awards. In 2014 she received an honorary doctorate from the faculty of arts at Umeå University. She also holds an honorary doctorate from the faculty of art, music and design at the University of Bergen. She has been awarded the Prince Eugen Medal (2020), the Stig Dagerman Prize (2019), the John Savio Award (2017), the Illis quorum medal (2017), the Per Gannevik scholarship (2015) and the Rubus Arcticus scholarship (2000). In recent years she has taken part in exhibitions at several prominent international venues: Documenta 14 in Kassel and Athens (2017), the Venice Biennale (2022), Ikon Gallery in Birmingham (2022) and the Southern Alberta Art Gallery in Lethbridge, Canada (2021/22). 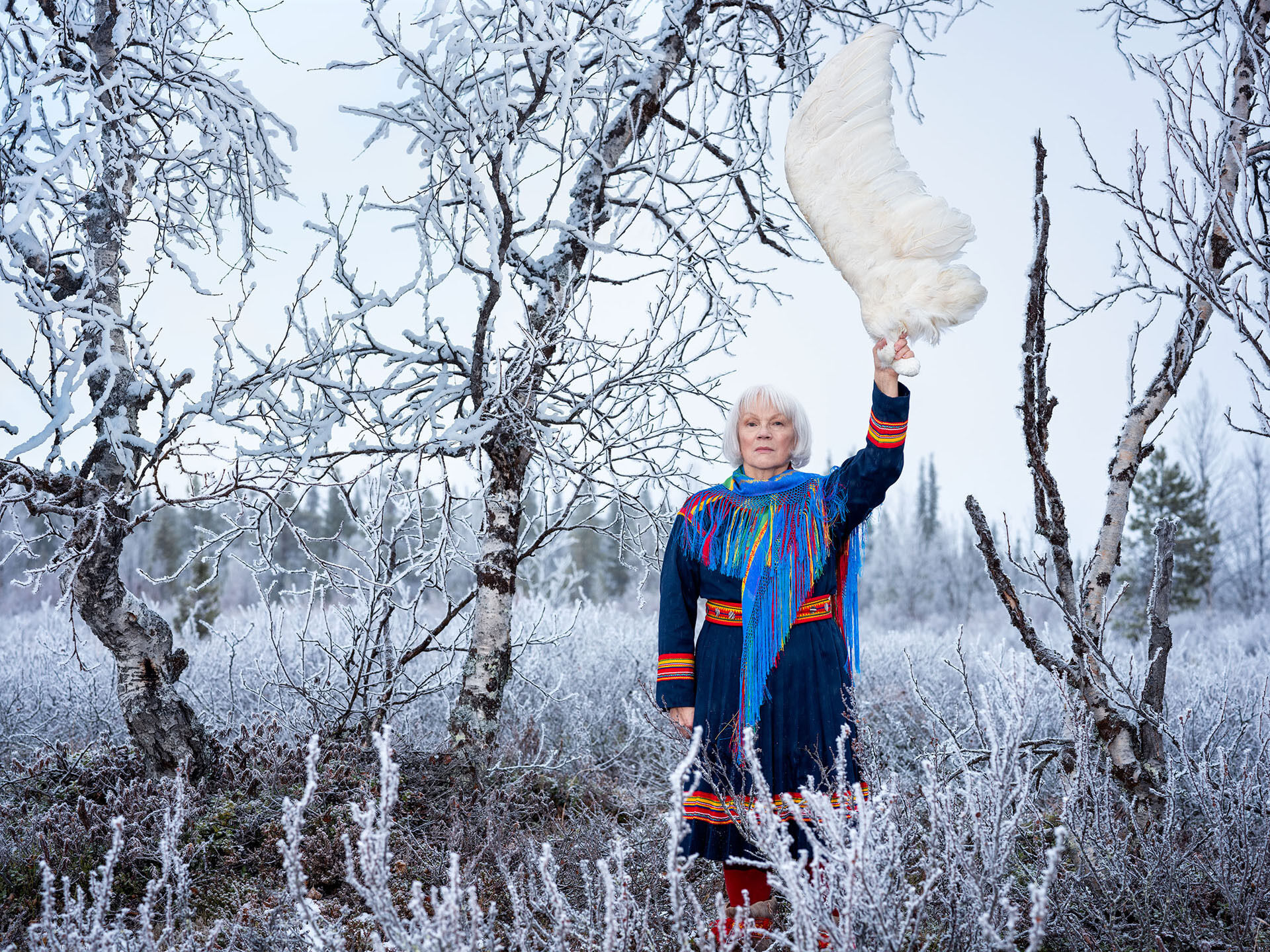 The Portrait of Honour is the work of Marja Helander, a contemporary artist who has gained an international reputation for her works depicting Sami nature, landscapes, people and culture. Helander’s photographs and films are represented in several art collections in Scandinavia, Canada and Germany. Her latest short film, Áfruvvá (2022), premiered as part of the extended programme for the Sami pavilion at the Venice Biennale.

After visiting the Swedish National Portrait Gallery at Gripsholm Castle, touring the galleries and studying the artworks, Helander became fascinated by the long history of portraiture. She realised the importance of creating a work with a clear connection to the portrait collection. She and Marakatt-Labba drove for many miles around Övre Soppero until they finally found the perfect snow-covered location for the portrait.

This year marks the bicentenary of the Swedish National Portrait Gallery, the world’s oldest national portrait gallery. Founded in 1822, it is now managed by Nationalmuseum. Since 1959, a number of works are added to the collection each year, including an annual Portrait of Honour, donated by the Gripsholm Association, depicting a distinguished Swedish citizen. The Gripsholm Association was founded in 1937 to promote the holdings and collection of Gripsholm Castle and its improvement.